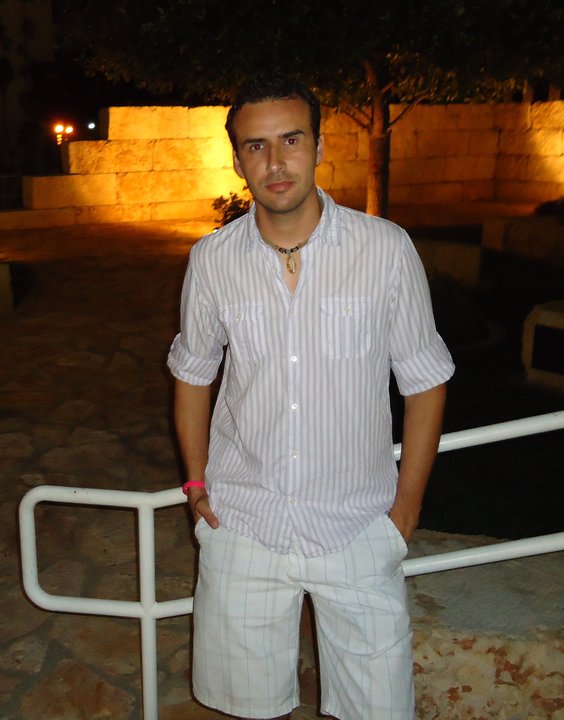 Fernando Alcantar could be the latest Pew Research report – “The Shifting Religious Identity of Latinos in the United States” – come to life. Photo by Andrew Sutton, courtesy of Fernando Alcantar
May 7, 2014
Cathy Lynn Grossman

WASHINGTON (RNS) A new report on the "Shifting Religious Identity of Latinos" reads very much like a biography of Fernando Alcantar. 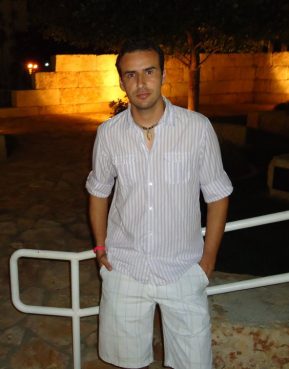 Fernando Alcantar could be the latest Pew Research report – “The Shifting Religious Identity of Latinos in the United States” – come to life. Photo by Andrew Sutton, courtesy of Fernando Alcantar

Like six in 10 Hispanic Catholics in the U.S., he was born in Mexico, where “you are Catholic as much as you are Mexican. You like jalapenos and worship the Virgin of Guadalupe,” he said.

But once he moved to California after high school, his faith journey diverged -- and derailed. Today, Alcantar, 36 calls himself a humanist.

The Pew survey report released Wednesday (May 7) is subtitled: “Nearly One in Four Latinos are former Catholics.” And Alcantar is one of them.

Hispanics are still a pillar of American Catholicism -- fully a third of the U.S. church today. And their share is climbing with the overall growth of the Hispanic population.

More than half (55 percent) of the nation’s estimated 19.6 million Hispanics identify as Catholic, according to Pew's report, which uses "Hispanic" and "Latino" interchangeably.

But that’s 12 percentage points below 2010, when 67 percent of Latinos surveyed said they were Catholic, the survey found.

“Everyone was surprised in some way by the findings, the first time the size of the decline in Hispanic Catholics has been measured in depth," said Pew research associate Jessica Hamar Martínez. 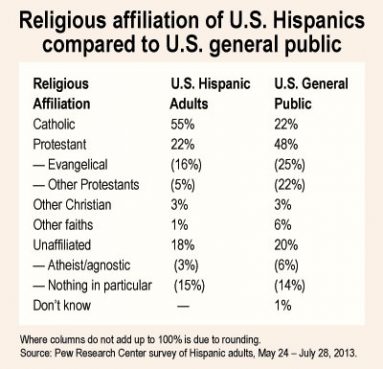 "If both (immigration and shifting) trends continue, a day could come when a majority of Catholics in the United States will be Hispanic, even though the majority of Hispanics might no longer be Catholic," the survey said.

According to the new survey:

That sounds familiar to Alcantar, of El Centro, Calif. He left Catholicism at 18 and Christianity altogether by the time he was 32. Two of his three siblings are agnostic; only one sister remains devoutly Catholic.

Among ex-Catholics who turned to another faith, Pew found many have turned to the enthusiastic worship of Pentecostal and charismatic or "renewalist" faiths that celebrate gifts of the Holy Spirit such as divine healing, receiving direct revelation from God and “a strong sense of God’s direct, often miraculous, role in everyday life.”

That rang true for Alcantar’s parents. His mother, Teresa Foucar, is now part of the Salvation Army, and his father became a deacon with an Assemblies of God church.

Among ex-Catholics, most told Pew they either “drifted away” (55 percent) or they just stopped believing in the teachings of their childhood faith (52 percent).  "There’s rarely, if ever, a single reason,” Funk said.

Pew drew a wide range of responses to an open question on why people moved. Only 9 percent said they switched because they married someone who practiced a different religion. Just 3 percent mentioned the clergy sex abuse scandal as a reason for switching.

Timothy Matovina, a University of Notre Dame theology professor who is familiar with the new survey, is skeptical that the out-the-door trend can be reversed, particularly for millennials.

Matovina observed that American children don’t grow up with deeply embedded cultural Catholicism. And even those who did -- such as immigrants from Mexico, and Central and South America -- need more than that to remain with the Catholic Church.

"They need a Catholicism of commitment, one based on a personal encounter with Jesus Christ that enlivens their faith and makes them stronger in this culture of religious choice that is the United States," Matovina said. "The real story is all the switching in a pluralistic culture. The hardest switch is the first one. But then you can do it again and again with less cultural dissonance.”

Alcantar’s path illustrates Matovina’s concern. He was initially drawn to Pentecostal Christianity for the strong sense of community and the beautiful promise of a personal relationship with Jesus, he recalled.

He graduated from the evangelical Azusa Pacific University, joined a nondenominational church, then went to work leading youth groups for the United Methodist Church. He did international mission work with believers of many denominations and finally landed on a pile of questions.

“The emotional connection between me and Jesus and God was finally broken. I became angry at God for all the misery, poverty and discrimination I saw in the world. I finally allowed my doubts to come to the front burner,” said Alcantar.

The Rev. Allan Figueroa Deck, a Jesuit theologian at Loyola Marymount University in Los Angeles, said the findings are custom-made for Pope Francis' mission to the church.

“Many groups reaching out to Catholics do have some level of success. But it’s not because people want to leave the church but that the church is not present to them," he said. "Pope Francis’ reform is that the church must be totally focused on outreach. It has to go to the parks and the plazas and strip malls and be present in the workplace."

The Pew Hispanic survey was conducted in English and Spanish between May 24 and July 28, 2013, with 5,103 Hispanic adults, ages 18 and older. The margin of error is plus or minus 2.1 percentage points overall.

Pew’s findings dovetail with another major study released this week, "The National Study of Catholic Parishes With Hispanic Ministry." Hosffman Ospino, a professor of Hispanic ministry at Boston College, and researchers from Georgetown University's Center for Applied Research in the Apostolate issued the study Monday.

It detailed signs of vibrancy, such as the high percentage of young Hispanic families. It also found signs of concern. The nation’s one-in-four Catholic parishes that are Hispanic “struggle with finance and personnel,” many with no special training in Hispanic ministry, Ospino said.

“One of our hopes is that if the Catholic Church invests more in family and youth, that these young people will stay," he said. "Secularization is a major threat to our future."

Related Posts
By Emily McFarlan Miller
To cope with pandemic, Americans choose binge-watching TV over the Bible
By Amy Klein
What good is faith when your fertility treatments aren't working?
By Alejandra Molina
‘Your fight is my fight’: Latino clergy and faith leaders rally behind Black Lives Matter
By Alejandra Molina
Who is Junipero Serra and why are California protesters toppling statues of this saint?
By Thomas Reese
COVID-19 costs President Trump support among Catholics