(RNS) From efforts to install a monument at the Oklahoma Capitol to a controversial “Black Mass” at Harvard University, Satanists are all over the news. 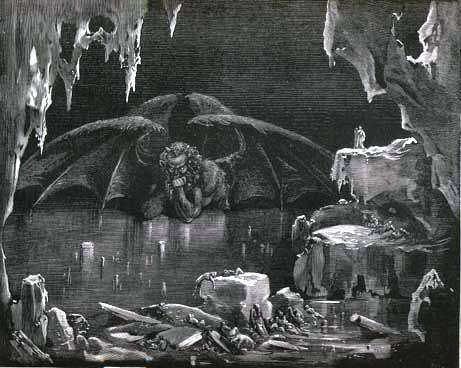 Satan freezes in the Ninth Circle of Dante’s “Inferno,” from a classic Gustav Dore’ illustration.

But are they, along with Wiccans and pagans, all together in one non-Abrahamic lump?

Not at all, say experts on paganism and the major Satanist groups’ websites.

“Paganism is an umbrella term for a wide variety of traditions outside the Abrahamic faiths. Wicca is the largest but there are countless others, from Druid to Heathen to people who are creating their own faiths even as we speak,” said Laura Wildman-Hanlon, a Wiccan priestess and editor of “Celebrating the Pagan Soul.”

“Satanism is a different path,” she said.  “Most pagan faiths are polytheistic and probably just as diverse as all the forms of Catholic and Protestants who worship from the same book but approach it differently.”

The headliner Satanists of the moment are followers of the New York Satanic Temple. This is the group behind the controversial “Black Mass” — a mocking version of a Catholic Mass minus a consecrated host for the Eucharist — held across the street from Harvard Yard on Monday evening (May 12).

According to the Harvard Crimson newspaper, the event originally planned for a campus site had only 50 people attending while hundreds went to a genuinely Catholic holy hour at a nearby church in protest.

In the Judeo-Christian tradition, Satan takes on a number of forms as the embodiment of evil — as a snake who tempts Adam and Eve in the Garden of Eden, as the “devil” who tempts Jesus with promises of worldly power and as a dragon who is consigned to a “lake of fire and brimstone” of eternal damnation. Within Islam, Satan (or the devil) rejects God and fights alongside an army of mischievous spirits known as “jinn.”

The Satanic Temple, which calls itself “an organized religion,” has a track record of provocative public events, including:

The leader and frequent spokesman of the group, Lucien Greaves, could not be reached for comment Tuesday but makes frequent appearance at atheist and humanist groups to explain the goals of the Satanic Temple.

However, there are multiple visions of Satanism, including one that takes a very different stance. Anton LaVey founded a Church of Satan in 1966 that stresses Satanism as a reaction to Catholicism, including rebelling against the church and satirizing its beliefs.

In LaVey’s view, Satanism is a philosophy, not a religion. Satanists don’t worship a devil with horns and a pitchfork. Indeed, they don’t worship anyone. They are atheists in an indifferent universe. However, Satan is seen as a “symbol of pride, liberty and individualism.”

According to the Church of Satan, each person is a god and there’s no room for others, including “Satan, Lucifer, Cthulhu or whatever other name one might select or take from history or fiction.”

The church’s rituals are described as  “self-transformational psychodrama” designed to “purge oneself of unwanted emotional baggage.”

That’s not exactly paganism, in the view of Julie Fennell, assistant professor of sociology at Gallaudet University.

“Wiccans have a very clear understanding that the universe cares what you do. Good or bad, it has consequences. They don’t think it is an indifferent universe,” said Fennell. “Satanists believe you are only answerable to yourself.”