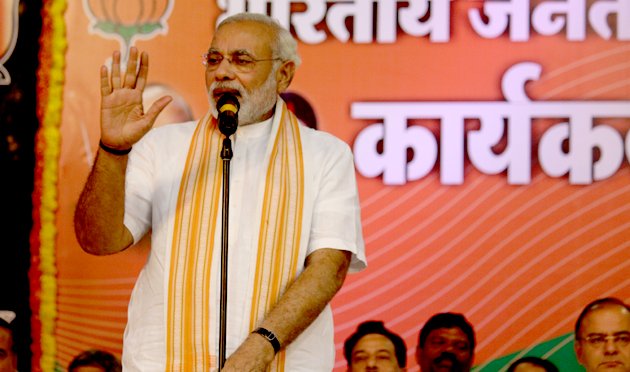 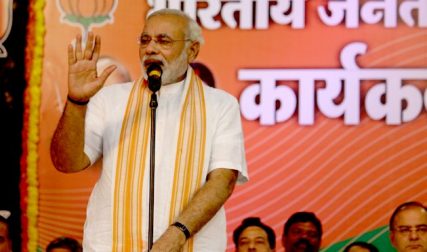 Boom. I just stamped your virtual passport. You'll have to travel today for the religion news.

There is only one person ever banned from the U.S. under the International Religious Freedom Act. His name is Narendra Modi, and he was just elected prime minister of India in the largest democratic election in history of the world. What to do?

Hundreds of traditional Nigerian hunters -- armed with spears, amulets and faith in their spiritual prowess  -- say they know the bush better than Nigerian soldiers and are readying themselves to rescue the kidnapped Nigerian schoolgirls.

That address was none too pleasing to many a non-Mormon in the crowd who didn't appreciate Mormon Beck's many a Mormon reference, writes RNS blogger Jonathan Merritt. But Liberty's Vice President Johnnie Moore explains that Liberty's graduation speakers do not speak for the university, and may come from different faith backgrounds. Then he added:

By the way, many conservative evangelical leaders who are closer to Beck than me have told me that they believe Beck has had a born again experience recently.

A Muslim student amidst the born again

In a first, Southwestern Baptist Theological Seminary has admitted a Muslim student, a Palestinian doctoral candidate in archaeology who says he's very happy there. But not all Baptists with ties to the school are so pleased with his presence.

If I were this Muslim student I would feel really awkward right now » http://t.co/7PtCSgUPic // "you're accepted so we can convert you..."

But the Vatican said that just because there were six such suspect transactions in 2012, and 202 in 2013, doesn't necessarily mean the place is any shadier -- it's getting better at policing itself. Our own Josephine McKenna reports.

In Israel this coming weekend, Pope Francis and Ecumenical Patriarch Bartholomew's efforts toward closing the Great Schism will lack a key collaborator: the Russian Orthodox Church (ROC), which represents 165 million of the world's 250 million Orthodox Christians. Here's the history and how Putin's Crimea expedition has made the goal yet more elusive.

Our Lady Woman of Valor Pastoral Center for Migrant Workers serves more than 1,000 Catholics from the Philippines, Nigeria, Eritrea and other countries from which natives have sought a better life and asylum in the Jewish state. Because Israel's day of rest of Saturday, which is many of the immigrants' only day off, more masses are held on Saturday than Sunday.

Chipotle says "please don't bring your guns into our stores," after a pro-gun group flashed assault rifles and other weapons in an "open carry" demonstration in Dallas last week that caused some burrito eaters heartburn. And Georgia's highest court says it's fine for corrections officials to hold secret the types of drugs used in executions.

An Arizona Republican candidate for Congress says most mass shootings are committed by Democrats.

That last item was depressing so let's lighten things up. Jewish comedians are plentiful -- but Orthodox Jewish comedians? When strict observance of Jewish law means you're not allowed to say a mean thing about anybody, how does this work? The Tablet explores the phenomenon.

Subscribe to the roundup. It's unorthodox and sometimes funny.