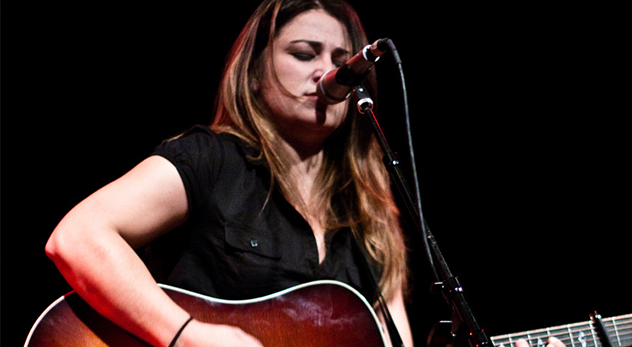 The former Christian singer previously said she wasn’t interested in being an advocate for LGBT issues, but a forthcoming book tackles the topic head on. – Image courtesy of Dani Palmer (http://bit.ly/1pcZx8W)

Four years ago, when musician Jennifer Knapp declared to the world that she was in a lesbian relationship, conservative Christians around the country released a collective gasp. They had traveled from far and wide to hear her sing and purchased more than one million of Knapp’s albums. But the Grammy-nominated musician’s revelation tested their loyalty.

At the time, Knapp had already been on a seven-year professional hiatus and declared she was not interested in being a poster girl for the gay Christian community. Neither did she feel equipped.

“I’m in no way capable of leading a charge for some kind of activist movement,” Knapp bluntly told “Christianity Today” in 2010, adding, “I’m not capable of getting into the theological argument as to whether or not we should or shouldn’t allow homosexuals within our church.”

But her sense of readiness has apparently changed. Simon and Schuster is preparing to release a book by Knapp in October titled, “Facing the Music: Discovering Real Life, Real Love, and Real Faith.”

According to the publisher’s website, Knapp is “now an advocate for LGBT issues in the church” whose memoir tells the story “of her troubled childhood, the love of music that pulled her through, her dramatic conversion to Christianity, her rise to stardom, her abrupt departure from Christian Contemporary Music, her years of trying to come to terms with her sexual orientation, and her return to music.”

The description continues: “She also talks about the importance of her faith, and despite the many who claim she can no longer call herself a believer, she maintains that she is both gay and a Christian….Jennifer has witnessed heartbreaking struggles as churches wrestle with issues of homosexuality and faith.”

Simon and Schuster is releasing the book through Howard Books, its Christian imprint, which is a member of the Evangelical Christian Publishers Association. Earlier this year, there was controversy within the ECPA about another member, Waterbrook Multnomah, whose sister imprint, Convergent Books, published “God and the Gay Christian: The Biblical Case in Support of Same Sex Relationships” by Matthew Vines. Some members felt that the book strayed from evangelical orthodoxy by endorsing homosexual behavior.

As a result of the brouhaha, the National Religious Broadcasters forced Walterbook Multnomah to resign its membership in the organization. NRB’s president and CEO Jerry Johnson wrote in a letter to board members: “This issue comes down to NRB members producing unbiblical material, regardless of the label under which they do it.”

According to Jennifer Smith, publicity director for Howard Books, Knapp is expected to deliver the manuscript to her editor next week.

“We know it’s her story and obviously the position she’s found herself in as a recognizable Christian artist coming out as gay. She shares about how she has come to terms with herself and her own sexuality and is able to speak on the topic and say, ‘Look, God loves me through this.'”

While Smith did not say whether Howard expects a similar controversy to the one Waterbrook Multnomah faced due to Vines’ book, she sent the following official statement from Howard Books to Religion News Service to elaborate on their expectations:

“While we understand there will be some people that don’t necessarily agree with this book, there are others who want to have this conversation. This is simply a vehicle for us to encourage Christians to open their hearts and minds to having the discussion openly. At the end of the day, this book is an opportunity for Jennifer to tell her story and we want to be part of that conversation.”

Given the momentum of this issue among American Christians, one can only expect more books like Vines’ and Knapp’s will be coming. The question is now how organizations such as NRB and the ECPA will respond. Phone calls to National Religion Broadcasters for comment were not immediately returned.

Upon coming out of the closet, some of Knapp’s fans expressed outrage and disappointment while others rallied behind her. One month after Knapp’s interview in “Christianity Today” about coming out, her album “Letting Go” debuted at No. 73 on the “Billboard 200 Chart.” When “Facing the Music” hits bookstores in October, sales numbers will reveal if her fans have stuck around. But they may also be a bellwether of where the Christian community at large is on the matter of homosexuality and the church.