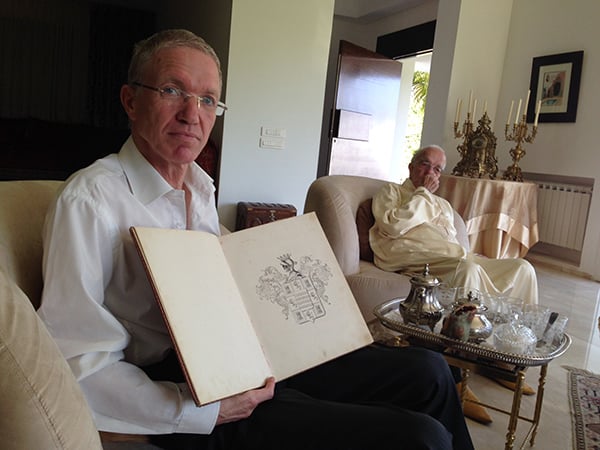 Hassan Bargach at his home in Rabat, Morocco, on Wednesday (June 4), showing the book presented to his family by the Spanish government tracing its roots to the Iberian town of Hornachos. Photo by Gil Shefler

RABAT, Morocco (RNS) The Bargachs are not typical Moroccans.

Despite being proud Muslims, they celebrate a version of Christmas, eat as much paella as they do couscous, and pepper their native French and Arabic with Spanish words.

“We are proud of being Spanish and Moroccan,” said Hassan Bargach, whose family originates from the Spanish town of Hornachos and is among a group that has held onto some Iberian customs despite living in Morocco for centuries.

They are descendants of Moriscos, Muslims who were expelled from Spain in 1609 and are scattered across the Mediterranean Sea — cultural cousins of Sephardim, Jews of Spanish descent.

Now, with Spain’s initiative to offer Sephardic Jews a path to citizenship, some Morisco descendants have called on Madrid for similar treatment: if not the same rights, then at least recognition of their heritage.

“We think we deserve some respect for the suffering Moriscos experienced,” said Najib Loubaris, president of the Association for Andalusian Remembrance.

Like Sephardic Jews, Muslims were an integral part of Spain’s society before being painfully uprooted by Christian rulers. Many were forced to convert to Christianity and later prohibited from taking their possessions. A large number perished at sea.

If and when they arrived at their port of call, their travails were far from over.

“They were not well-received,” said Hassan Aourid, author of a popular historical novel, “Le Morisque,” or The Morisco, set in that period.

“Many locals looked down on them for being bad Muslims, and indeed they were,” said Aourid. “They were neither good Christians nor Muslims; they drank wine but did not eat pork. Most did not speak any Arabic — they were Spanish.”

Unlike Sephardic Jews who held on to separate religious rites and to a Judeo-Spanish language, known as Ladino, most Moriscos eventually integrated and became indistinguishable from their co-religionists within a few generations.

Recently, some descendants are rediscovering their Iberian heritage.

Loubaris is one of those who became aware of his Morisco roots late in life, thanks in part to an abundance of books that have appeared on the subject. His surname is a version of Olivares, a Spanish town near Seville. After their expulsion from Spain, his ancestors were among those who founded the city of Sale opposite Rabat, where they sought retribution against Christendom by engaging in piracy.

“My sister explored our family heritage and discovered we were descendants of Ibrahim Bin Loubaris, a pirate who fought against the Americans in the Barbary Wars,” he said.

A few years ago, Loubaris formed an association with others that he said counts hundreds of members in Rabat, Tetouan, Marrakech, Fez and other Moroccan cities. He does not know how many Muslims of Spanish ancestry live in Morocco but says there are some 500 surnames of Morisco origin in the books.

While some are reconnecting with their heritage, the Bargachs have held on to their customs. They use Spanish words and feast in late January exactly one month after Christmas to welcome “Spanish Santa Claus.”

More than 100 years ago, the Spanish government gave a member of the Bargach clan a family tree showing them to be direct descendants of Jaube Vargas, the Christian governor of Hornachos.

According to family lore, Vargas voluntarily went into exile with his subjects in 1609 as an act of conscience and only later converted to Islam of his volition.

In 2002, the municipality of Hornachos honored a member of the Bargach family in a ceremony for the family’s contribution to the town’s history.

Bargach said descendants of Moriscos in Rabat married only within their community and continue to do so to this day.

He, too, has heard of the Spanish initiative to give citizenship to Sephardic Jews.

One member of the newly founded Morisco association camped outside the Spanish consulate in Tangier demanding citizenship, too, after hearing the news, according to Loubaris.

The president of the association said Spain’s methods of determining Sephardic identity were vague, and by not applying them to Moriscos it exposed their double standard.

Aourid, the novelist, pointed out the differences between the expulsions of Jews in 1492 and of Muslims in 1609.

He said that while Jews were expelled solely for their religious beliefs, Moriscos were also considered a fifth column at a time of tremendous struggle with the Muslim Ottoman Empire and had rebelled twice. And while the number of Sephardic Jews seeking citizenship is not expected to be high, there may be millions of Morisco descendants in Tunisia, Algeria, Morocco and beyond who might apply.

He suggested an alternative way to right the wrongs of expulsion and build bridges between the faiths: by allowing Muslims to pray at the famed Mosque Cathedral of Cordoba, originally a Muslim place of worship that was converted to a church.

For his part, Bargach is not interested in Spanish citizenship, even though he has to wait many hours at the border on his frequent trips to Spain. Family members are already dual citizens of Canada, the U.S. and France.

An affluent businessman, he said that if Spain did not want to bestow citizenship to descendants of the Moriscos it would be their loss and would not affect his affinity for the country.

“I am Spanish,” he proclaimed. “I don’t need citizenship for that. Nobody can take it away from me.” 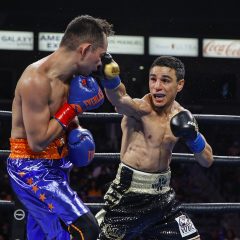 News
Armenian Christian community caught between Israelis and Palestinians
Follow us on Facebook!
Submit your photos to RNS