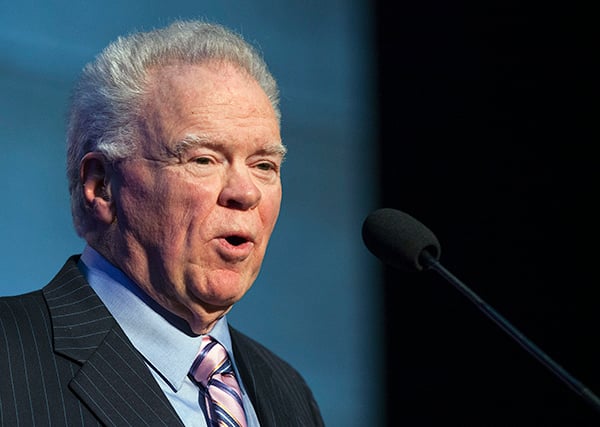 Paige Patterson, president of Southwestern Baptist Theological Seminary in Fort Worth, Texas, gives a report to attendees at the Southern Baptist Convention’s annual meeting on June 11, 2014.

BALTIMORE (RNS) The head of Southwestern Baptist Theological Seminary offered an emotional apology to Southern Baptists for accepting a Muslim student into his school’s Ph.D. program — an unusual step for an evangelical seminary but one other schools have taken for years.

“I made an exception to a rule that I assumed, probably wrongly, the president has the right to make if he feels that it is that important,” Paige Patterson told Southern Baptist delegates on Wednesday (June 11). “He was admitted as a special student in the Ph.D. program.”

Patterson, an architect of the conservative takeover of the Southern Baptist Convention a generation ago and one of the church’s most revered figures, faced heavy criticism from some Baptists who accused him of violating the standards of his school in Fort Worth, Texas.

Some were worried that the student, Ghassan Nagagreh, was receiving money from the denomination’s funding program. Patterson insisted that Nagagreh, a Palestinian Muslim student who initially worked as a volunteer on a Southwestern archaeological dig in Israel, received no financial support.

While the move to admit a Muslim student at a leading evangelical seminary shocked some Southern Baptists, observers say students from other faiths at other Christian seminaries typically don’t get much notice.

At some prominent seminaries — Harvard, Yale, the University of Chicago and others — it’s not unusual to have students of various faiths studying side by side; students at the nonsectarian Harvard Divinity School represent more than 30 religious traditions. But among evangelical schools, students are almost all Christian.

Some Southern Baptist seminaries — including Southwestern — have offered courses to people of all faiths, but they have been specifically for prisoners. Southwestern’s program with the maximum-security Darrington Unit in Texas is modeled after one offered by New Orleans Baptist Theological Seminary, where Patterson’s brother-in-law, Chuck Kelley, is the president.

Patterson found himself Wednesday answering not only questions about admitting Nagagreh but also about the range of students in the Darrington program, which he said includes Muslim and atheist inmates.

“Unfortunately, it is the case that you cannot discriminate and have a program in prison,” said Patterson. “We have no choice. We have to admit them to class but the wonderful thing, of course, as you would guess, is that as they are studying in class they are coming to know the Lord.”

That’s why Patterson supported admitting the Sunni Muslim student, who he described as “very open, at this point, to the gospel of Jesus Christ.”

Danny Akin, president of Southeastern Baptist Theological Seminary in Wake Forest, N.C., who spoke to delegates right after Patterson, said, “Dr. Patterson did not have to apologize to me for his love for lost people.”

In an interview, Akin said his school has not admitted any Muslim students but is considering a prison program that could.

All six Southern Baptist seminaries require students to meet strict standards that demonstrate their evangelical belief: a profession of faith, a testimony that gives evidence of that faith, a church endorsement and three references that affirm their Christian character.

“We will not be changing ours,” Akin said of the policy on faith requirements. “I suspect the others won’t, either.”

Southwestern is not the only school that has faced controversy when it made overtures outside its faith.

In April, the United Methodist-related Claremont School of Theology announced that it was ending a two-year joint venture with Claremont Lincoln University. Good News, a conservative Methodist caucus, welcomed the decision, saying, “The partnership was highly controversial because of its vision of jointly training clergy of different non-Christian religions alongside future United Methodist pastors.”

Steven James, chairman of Southwestern Seminary’s trustee board, said the board has heard the concerns of Southern Baptists and will weigh them at a fall meeting “with our president, whom I believe in.”

Patterson, a veteran of 63 consecutive SBC annual meetings, apologized profusely to the convention, his family, his faculty and his board of trustees, which he noted was not responsible for his decision about the student.

But he added that he already had an answer prepared for God.

“I believe when I stand before the Lord God, I’m going to say, ‘Dear God, I violated a policy but I didn’t want to stand before you with blood on my hands,’” a choked-up Patterson said. “’Dear God, I did the best I knew how.’”

Religion Hub
Mideast’s Jordan River: Rich in holiness, poor in water
Follow us on Facebook!
Submit your photos to RNS