Deodonne Bhattarai of Washington, D.C., who is 7 1/2 months pregnant, demonstrated in front of the Supreme Court, which heard cases of two businesses challenging the contraception mandate of the Affordable Care Act on March 25, 2014. RNS photo by Adelle M. Banks

WASHINGTON (RNS) The U.S. Supreme Court is expected to finally issue its ruling this week in the highly anticipated case of the craft companies vs. Obamacare.

Technically,  it’s Sebelius v. Hobby Lobby and Conestoga Wood Specialties, a showdown over the Affordable Care Act’s contraception coverage mandate. The core legal question is whether a private company can have religious rights.

But to the general public, this is seen as a showdown between employers — the evangelical Green family behind Hobby Lobby and the Mennonite Hahn family that owns the Conestoga cabinet company — and the employees’ personal reproductive choices under their insurance.

While conservatives have cast the battle as one for religious freedom, the general public may see it as a showdown over personal health choices.

Public opinion polls zeroed in on the ABC words: abortion and birth control: Must employers offer insurance coverage for contraceptive services they consider to be abortifacient (blocking a fertilized egg from implanting in the womb) if they have sincere religious objection to abortion?

And the polls consistently find most Americans support the mandate, even when business owners object on religious grounds.

The Kaiser Health Tracking Poll, released in April, found “the public supports the requirement by a nearly 2-to-1 margin (61 percent support, 32 percent oppose).

Kaiser also asked specifically about requiring coverage in the Hobby Lobby scenario: Should a for-profit business owner with religious objections to birth control be subject to the requirement? Again, a majority (55 percent) said yes, they should, “even if it violates their owners’ personal religious beliefs.”

Even so, 40 percent of respondents said for-profit companies should not be required to offer this insurance coverage “even if it means their female employees will have to pay the cost of birth control themselves.”

In February 2012, when furor over the mandate first ignited, the findings were similar. A survey by the Public Religion Research Institute at the time found that 55 percent of Americans agreed “employers should be required to provide their employees with health care plans that cover contraception and birth control at no cost.”

Response divided by religious lines and by gender. Favoring the requirement:

Earlier this month, when PRRI revisited this issue, it found no statistically significant shifts in views.

Americans’ views on the mandate may be shaped by their opinions on contraception. Gallup looked into this in May 2012, and found 89 percent of all Americans, including 82 percent of Catholics, say “birth control is morally acceptable.” 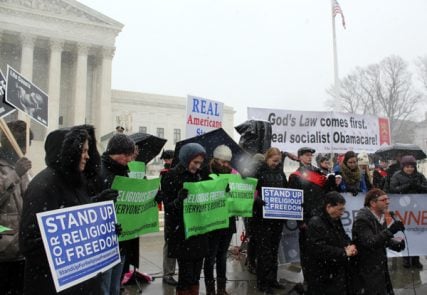 Supporters pray outside the Supreme Court as they support businesses challenging the contraception mandate of the Affordable Care Act on March 25, 2014. In the foreground far right, the Rev. Frank Pavone of Priests for Life, left, and the Rev. Patrick Mahoney, right, kneel in prayer during a vigil. RNS photo by Adelle M. Banks

It’s also popular. A May 2013 fact sheet from the Guttmacher Institute, which studies reproductive health and rights issues, found:

Hobby Lobby already covers all the most popularly used methods of birth control in its health plan, including pills and barrier methods such as condoms and sterilization (more than 90 percent of the methods most used by Americans, according to Guttmacher) that work by preventing conception.

Where the evangelical owners drew the line was at covering devices such as IUDs or medications such as Plan B that can work by blocking implantation of a fertilized egg in the uterus, thus preventing a successful pregnancy.

But many in the public are aware that a decision that favors Hobby Lobby would affect Catholic business owners who follow their church’s teaching against artificial birth control that prevents conception as well.