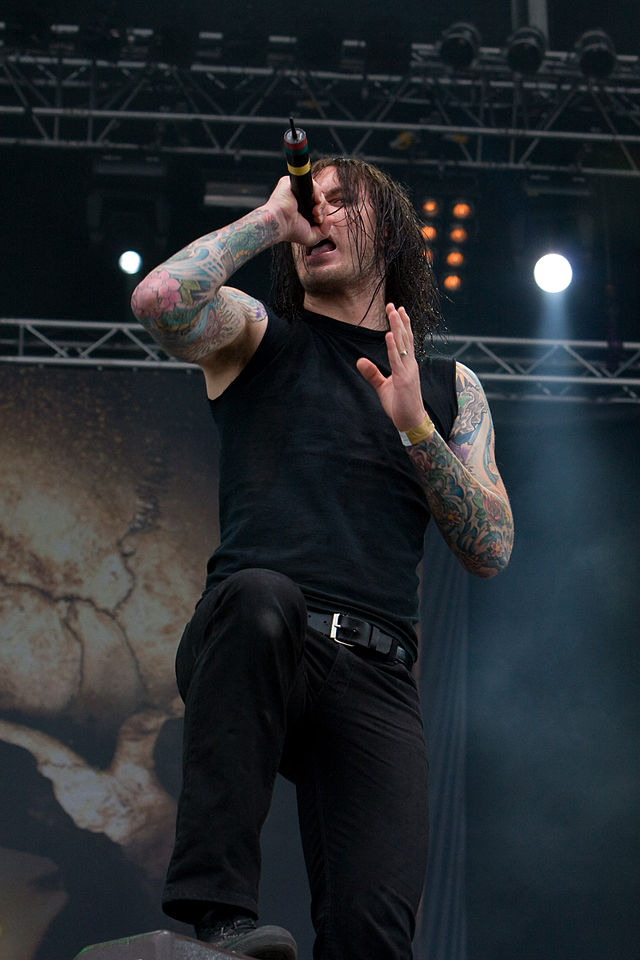 Tim Lambesis of As I Lay Dying. Photo by Matthias Bauer, via Wikimedia Commons.

Tim Lambesis—lead singer of metalcore band As I Lay Dying, who last month was sentenced to six years in prison for plotting to murder his ex-wife—made headlines over the weekend after admitting that he was actually an atheist.

This admission was a surprise to many. Lambesis publicly identified as a Christian for many years and As I Lay Dying gained a large Christian following. As the Christian Post wrote in 2011: “In a genre known for its secularism, As I Lay Dying stands out from the crowd by spreading God’s message in mosh pits.”

But then things changed. In a lengthy interview with Alternative Press, Lambesis said:

[While studying religion in college] I’d get three pages of the traditional evangelical conservative point of view, then three paragraphs or sometimes even just three sentences from the atheist perspective. But even in just a few sentences, I’d think, ‘This point of view makes more sense,’ even when it wasn’t being well represented. In the process of trying to defend my faith, I started thinking the other point of view was the stronger one.

Why did he keep his atheism secret? “I was afraid it would affect As I Lay Dying sales, which would affect my overall income,” said Lambesis. “Truthfully, I was an atheist. The ‘strategy’ I had at the time was cowardly.”

While he started to drop hints about his changing worldview in song lyrics and on social media—in 2012 he posted a Facebook status about watching Christopher Hitchens debate, and in 2013 he published a blog post saying he “felt that it was unreasonable to call myself a Christian in light of the evidence”—most people still thought he was a Christian.

So when he was arrested for plotting to murder his then-estranged wife, a number of atheist blogs posted the news that a “Christian metal singer [was] arrested for hiring a hit man to kill his wife.”

TJ Kincaid, creator of the popular atheist YouTube series “The Amazing Atheist,” went a step further in a video entitled, “TIM LAMBESIS: The Murdering Christian Rocker.” In it, Kincaid said, “I guess [Lambesis] asked himself ‘What would Jesus do?’ and Jesus said, ‘I’d kill my f---ing ex-wife.’”  The video currently has nearly 150,000 views.

Now that Lambesis has opened up about his atheism, a number of conservative and Christian publications have jumped on the story—fueling the idea that his atheism and the plot to murder his ex-wife are connected. As a writer for Christian News wrote, “He turned away from Christianity… And one sin led to another, turning his renunciation of Christ into justification for his actions.”

Unfortunately, the narrative linking his actions to atheism will probably continue to gain traction now that Lambesis no longer seems to identify as an atheist. In April of this year, As I Lay Dying issued a statement saying that “[Lambesis] was not a Christian at the time of his arrest… [but he] has spent much of the last year reevaluating what originally convinced him to abandon belief in God… After much brokenness and repentance he sees things differently [and] considers himself a follower of Jesus.”

The moral of this story? It’s not a good idea to use someone else’s personal tragedy to score points against a worldview held by many people. Casting an entire worldview as guilty by association isn't just wrong—it's ugly.

The mutually accusatory Christian and atheist responses to Lambesis’s story reveal a common problem. People are quick to jump to conclusions that conveniently fit their agenda of demonizing another group. But just as it was wrong to imply that Lambesis’s murder plot was connected to his Christianity, it is equally wrong to attribute it to his atheism.

You cannot make generalizations about atheism or Christianity based on a single person’s ideas or actions. As an atheist, I reject efforts to implicitly or explicitly blame Christianity as a whole for the actions of an individual—and I hope my Christian friends will reject any attempts to pin Lambesis’s actions on his atheism or to smear all atheists by association.