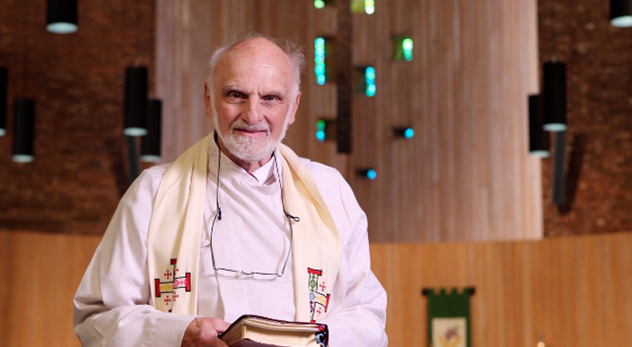 One of the most prolific and influential Bible scholars of the modern era challenges Christians to offer a “sneaky whisper” in the face of power.

Walter Brueggemann is one of the most prolific and influential Bible scholars of the modern era. He has earned two doctorates, has been awarded half a dozen more honorary ones, and is the author of many commentaries and books including, Journey to the Common Good, Sabbath as Resistance, and The Prophetic Imagination, a modern Christian classic. Today, Brueggemann is retired from teaching and rarely accepts interviews, but I’m grateful he made an exception to share wisdom with RNS’ readers.

Here, we discusses his book Truth Speaks to Power and how Christians can live these concepts today.

RNS: You believe the Bible has a message for us about the nature of power and how we should relate to it. Summarize that message.

WB: Legitimate power always includes attentiveness to justice, When power is not attentive to justice it cannot endure. This is a summons to us to keep the agenda of justice for the vulnerable alive and front and center to maintain a kind of subversive stance toward power.

RNS: Describe the relationship between truth and power as we find them in the Bible.

WB: Power is the capacity to organize and administer social goods and social access. Truth is the structure of reality that is in the nature of things that cannot be violated by our capacity to administer it. Power can sometimes be administered in harmony with such truthfulness, but very often power is seduced so that it runs contradictory to truth. [tweetable]Truth is not a set of propositions in the Bible, but a cluster of relationships.[/tweetable] Those are relationships of dignity, well-being, security and respect. When power violates those, then those who administer such power learn is that they cannot finally withstand the force of truth. So, the truthfulness of God’s commitment to neighborliness does not give in in the long run.

RNS: How does truth relate to power in the Exodus story?

WB: Moses is designated at the burning bush to be the carrier of God’s truth, which in that narrative is that God does not want people to be enslaved to the economy of Pharaoh. [tweetable] God does not want exploitative labor or excessively cheap labor.[/tweetable] Pharaoh never catches on as obtuse power usually does not. The truth carried by Moses is always coming from below in the cries of the slaves, but it always turns out that power from above never has the capacity to silence the cries from below. It is the cry from below that is finally generative of the historical possibility. Pharaoh is very slowly diminished and his power wanes and he does not catch on until it is too late—which I think is probably a right rendering of how that tends to work.

RNS: Can you give any other examples of truth’s “sneaky whisper” in the face of power?

WB: The whole movement that clustered around Rosa Parks was exactly that kind of sneaky whisper. And the whole apartheid movement in South Africa for which Desmond Tutu was a point person. And the Velvet Revolution in Eastern Europe that caused the fall of Soviet Union without any violent action is an example of resistance and possibility. In our own society, it is too soon to say, but it could be the movement of the 99 percent will amount to that. There is now a very important tilt in our political discourse toward populism, and if that really catches on, it will turn out to be a very transformative enterprise.

RNS: Along those lines, how was Jesus presented in the gospels in juxtaposition to first century power?

WB: Early on in the gospel traditions, the power elite in Jesus’ society who were colluding with the Roman Empire, recognized him as a threat and began to conspire to kill him. I think he was presented in the gospel narratives as being a huge threat to the established order of the Roman Empire. Whether, in fact, the Roman authorities perceived him that way or not, that is clearly how the gospel writers present him. There is a passage in the gospel of Luke that summarizes it by saying the leadership tried to find ways to kill him but they could not, because the people were mesmerized by his teaching. Or, “they were spellbound by his preaching.”

Jesus became a reference point for much of the hostility and resistance to the power of the empire because he refused to accommodate and told another story of reality that the empire could not co opt.

RNS: Some American Christians are now political and cultural power brokers. Is this dangerous?

WB: It is very seductive for all of us. And I suppose it has been the seduction of the Jesus movement since Constantine, when Christians gained access to power and have loved having it. I think the collusion of the church with political order in almost any society causes the church to lose its edge and have failure of nerve about the gospel that has been entrusted to it.

RNS: What does it look like for the average American Christian to speak truth to power in everyday life?

WB: We begin by talking about bodily pain and acknowledging our own. Then we notice that other people have bodily pain and we ask, “Why is that? What is causing that?” The way you hear that from people in our society is to talk about how stressed we are or how we do not have any time for anything. This is because of scheduled production and consumption that has been set by the market ideology.

There is a little text in late Isaiah that says, “Why do you labor for that which does not satisfy?” We labor and labor and labor for stuff that never satisfies us. The market ideology is now the new form of imperial power and many of us, without any critical reflection, have signed onto that and organized our lives in that way so we do not have any time, energy or capacity for the things that are rightly important to us. So, I think what I would want a modern congregation to reflect on are the causes of stress, lack of time and anything that is devouring our human-ness.