PARIS (RNS) Europe’s top human rights court has rejected a petition by a young Muslim woman who claimed France’s 2010 veil ban violated her rights to freedom of expression and religion and amounted to discrimination. 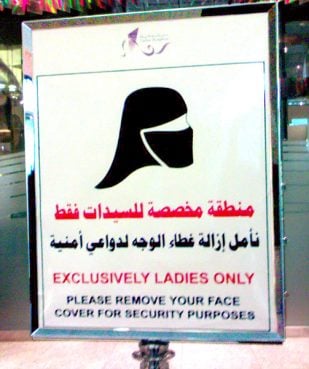 Patrons are asked to remove head coverings on a women-only floor at Kingdom Tower in Saudi Arabia. Europe’s top human rights court rejected a petition by a Muslim woman who claimed France’s 2010 veil ban violated her rights to free expression of religion and amounted to discrimination.

The French law bans most face-covering garments in public for security reasons. That includes the Islamic face-covering veil, or niqab, which authorities argue violates France’s secularist creed and women’s rights.

While a minority of women wear the face veils — fewer than 2,000, the government estimates, out of France’s roughly 2.5 million Muslim women — many Muslims feel the legislation unfairly singles them out.

The ruling by the Strasbourg-based European Court of Human Rights sparked swift reactions, with Amnesty International calling it “a profound retreat for the freedom of expression and religion.”

“These laws reinforce a sense of marginalization and possibly even radicalization among these young people, even if they’re a minority” of Muslims, said Borghee, who wrote a 2012 book on Muslim women adopting the niqab.

But Dalil Boubakeur, head of the state-backed French Council of the Muslim Faith, said he had no problem with the law.

Besides France, Belgium has also adopted the veil ban, as have parts of Switzerland, Spain and Italy. In France, several court decisions have similarly affirmed the ban’s legality.