Perhaps one of the most important subtexts of the lessons imparted by my largely conservative evangelical Christian upbringing was a lesson in identity. There’s that hackneyed joke about God whispering while giving the tour of heaven: “the Baptists live here.”

“But God, why are you whispering?”

“They think they’re the only ones here.”

Actually, when I first heard that joke, I didn’t think it was so much funny as true and applicable. Belief was deeply tied up with identity. We were the people who:

Marching orders — or rather, mind-control directives — were handed down from Colorado Springs or else certain suburbs in Illinois, depending. We had a number of self-appointed Popes, many of whom have unfortunately not yet seen fit to resign.

The litmus tests change over the years, but the essential gatekeeping function they serve do not. Having facial piercings and tattoos is no longer proof positive of your heterodoxy in many, many conservative circles, but believing scientists when it comes to human origins is. In many places, asserting women’s equality to serve in all areas of church life and leadership is taken as a denial of God’s own nature. Still other contexts make clear that if you do not, in fact, take Adam and Eve to be literal people from whose loins emerged all of humanity, you can make no claim to love Jesus, this in spite of the many facts that historians, biblical scholars, and scientists can marshal.

This world is one based on dogma-based identity rather than a humble commitment to seeking facts. There you shall go, and no farther, in questioning what you have been taught, or else you shall be summarily kicked out. The stakes are very, very high, particularly in institutions of higher learning such as Cedarville. It is a culture that encourages you to keep eyes half-closed, lest you accidentally see something that causes you to question what you ‘must’ believe.

There are also, of course, ‘liberal’ orthodoxies and dogmas that are not to be questioned. If I vote democrat and more or less identify as such, I’m not allowed to wonder whether charter schools and school voucher programs might not in fact be a good a idea.

The problem, as Yale Law School professor Dan Kahan recently found, is not necessarily ignorance. (I think his data indicates, if nothing else that snide comments about ‘clueless liberals’ and ‘ignorant conservatives’ can and should be left aside.) The problem is that our identities are too often too wrapped in in what we think we must believe — and, indeed, what we really HAVE to believe (or say we do) in order to stay within the fold of our churches, political parties, or institutions of higher learning. 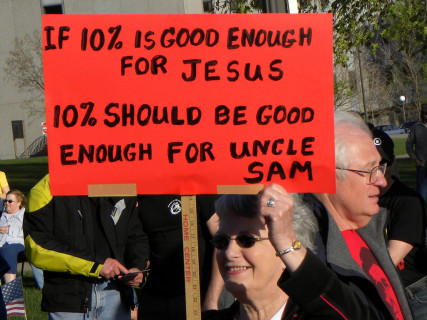 What would happen if we could unhitch ourselves from such identity games and celebrate the freedom of thought that is supposed to be a cornerstone of American identity? What if facts were not perceived as grave threats but as invitations to ongoing inquiry? The church came around to poor Galileo’s understanding of the heliocentric universe. It can happen.

And maybe, as Marilynne Robinson points out in her essay “Freedom of Thought,” religion can help. In the Hebrew Bible/Old Testament, the stories indicate that we humans are helplessly prone to befouling even the most, ahem, Edenic of situations. What if that story intends to teach us that we should aspire to humility, and not to know everything that God knows?

“Science can give us knowledge,” Robinson writes, “but it cannot give us wisdom. Nor can religion, until it puts aside nonsense and distraction and becomes itself again.”