The other day I wrote a piece for OnFaith in which I waded into the still-swirling controversy around contraceptives. In it, I urge people who are inclined to worry that certain contraceptives may interfere with the implantation of a fertilized egg to consider that even as they puzzle over this possibility and its ethical implications, women and children die by the millions for lack of safe and reliable birth control.

I noted in the piece that women in place like Malawi — where I recently spent a year and a half — very often don’t get to choose whether, when, or how they have sex. Consequently, the injection contraceptive Depo-Provera is a very popular choice among those seeking birth control. It was the choice of 90% of the women (yes, Catholic women too) at the clinic I observed.

The data suggests that the deaths of 1.6 million children under age 5 could be prevented each year if all pregnancies were spaced at least 3 years apart. Delaying the first pregnancy and spacing subsequent pregnancies would save many, many women as well. In the light of this preventable suffering and death, the hypothetical (and now very much contested) prevention of implantation seems…well, hypothetical.

Some commenters took exception to my argument, dismissing it as ‘consequentialist,’ as if I were advocating something clearly immoral for the sake of some ‘greater good.’ Others insisted that Christian theology and ethics can never be based off of “mere considerations of harm.” In fact, that’s exactly what I was suggesting: contraception as a non-controversial harm-reduction measure.

Harm reduction, which is usually discussed in the context of drug use or sexual activity (think needle-exchange programs or condoms handed out in the school nurse’s office), refers to policies that aim to reduce the possible harm inflicted by a range of behaviors — including those that we generally do not condone either in law or in most codes of morality.

For some people, harm reduction is equivalent to simple enabling and constitutes tacit endorsement. Others — usually the folks on the front lines, like the wonderful doctor I met who works in a methadone-alternative clinic in Camden — recognize that they’re applying a Band-Aid to a gunshot wound, but, given the brokenness and pain in our world, see this as preferable to nothing. 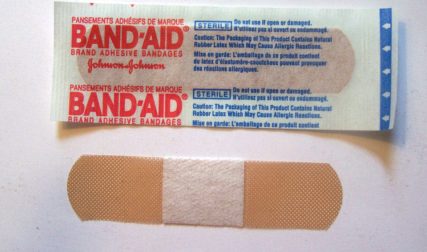 When I read the Bible, it’s hard for me not to consider that God may, in fact, be in the business of harm reduction. Doesn’t God know better than we do how messy and imperfect human existence can be? How there are so many situations in which there are no good choices, only less bad ones? How sometimes you just can’t do anything about systemic evils that give rise to certain problems and how, therefore, handing over a metaphorical Band-Aid is the only rational and loving response?

God hates divorce, the Bible says. But God makes provisions for a certificate of divorce so that a man can’t just toss a woman out on scanty reasons and leave her to die. Rape is an evil thing in God’s eyes, as is slavery, I believe, but these things existed in the cultures into which God was speaking, which is why God saw fit to put down some ground rules to reduce the harm that such situations embody and engender. God, in other words, doesn’t seem to be on the side of, say, Pope Benedict XVI when he pronounced that condoms might, in fact, exacerbate AIDS infection because distributing them sent the message that abstinence and fidelity in marriage weren’t the only solutions.

I see this kind of idealism all over. I saw it this week in responses to my post on birth control. And while I do believe that how we seek to do justice matters as much as the justice we seek, I believe that it is messy world, and the Perfect is too often held up as the enemy of the Good Enough or even the Less Bad. And I believe that in this messy world, God is in the business of harm reduction.

As one commenter, a Christian lawyer who goes by the alias Jane Dunn, said:

“The parable of the Good Samaritan did not commend the priest who walked on by convinced that solving the crime problem was a better long-term solution to the injured man’s problem. The one who was commended was the outsider who gave immediate care to the injured man, the one who made sure he was going to be cared for before moving on.”

Sometimes we have to shrug our shoulders and apply a Band-Aid. And God shrugs with us, and knows we’re just doing our imperfect best. 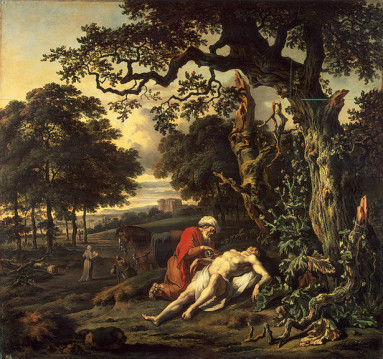 The Parable of the Good Samaritan. Jan Wijnants. 1670. Photo reproduction in the public domain via Wikimedia Commons.