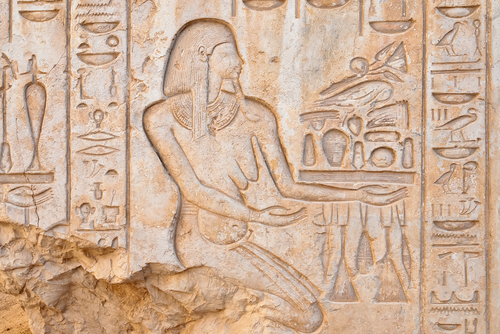 This Bas-relief detail from Luxor has absolutely nothing to do with Joseph Smith. It just looked cool. A prize to anyone who comes up with the most inspired translation.

This week the LDS Church released another statement in its excellent Gospel Topics series, this one focusing on the Book of Abraham and some of the trickier historical questions raised by its “translation” by Joseph Smith.

The statement tries to resolve historical questions about the Book of Abraham and focus on what the Church sees as the most important thing about it: its timeless doctrinal and spiritual truths.

It offers not one but two tenable arguments for why a discrepancy exists between Joseph Smith’s translation and what we have long supposed to be the Book of Abraham’s ur text. Neither of these arguments is new, but it’s certainly the first time they’ve appeared on the Church’s website as definitive.

First, we don’t have all the papyrus pieces and it’s entirely possible that what Joseph Smith was translating just isn’t part of the fragments we have left. An argument from absence.

Second, the statement invites us all to rethink what we have meant by the word “translate” in regards to Joseph Smith.

Maybe translate doesn’t mean that you take a document from one language and find the best approximate words in your own language to describe the original as closely as you can. Maybe it means something more akin to revelation.

That last part is the main stumbling block. We can likely buy the idea that the Book of Abraham is an “inspired by” adaptation, because isn’t that what we have in the Book of Mormon? A book that Joseph translated by supernatural means without having studied its original language—and sometimes even without looking at the original text?

But we have a harder time reconciling Joseph’s own statements and actions around the Book of Abraham. The new Gospel Topics statement says that Joseph “didn’t claim to be an expert in languages,” but I don’t find that entirely true. He assiduously – and very admirably – sought to correct his own lack of education by studying Hebrew, and sought not once but twice to create a book of Egyptian grammar, along with several followers. People don’t usually write a book about something unless they’re positioning themselves as experts.

Whatever the circumstances surrounding the translation of the Book of Abraham, it’s clear that we have historically taken from the book exactly what our particular era needed from it. Mormons from the early days even up through the brilliant Hugh Nibley emphasized the props of history: the artifacts themselves and any scholarly imprimatur we could manage to scare up to bolster our claims.

It’s a brave new world now when we are left with only the Book of Abraham itself, and what it says.

But not all of what it says. The Gospel Topics statement doesn’t call attention to its trippier teachings, such as the revolutions of the star Kolob and the chronology of God-time.

The statement also steers well clear of the book’s most troubling legacy: that descendants of “the loins of Ham” were partakers “in the blood of the Canaanites” and therefore ineligible for the priesthood. By linking this with another PGP passage that claimed a “blackness” among the “children of Canaan,” early Mormons damnably put two and two together and tied ineligibility for priesthood with race.

I for one am glad that we are choosing to emphasize totally different aspects of the Book of Abraham today:

Then again, I am entirely a creature of my age. Mormons a century from now will likely find entirely different things to like or hate about the Book of Abraham.

Culture
Student reporters at BYU-Idaho allegedly pressured not to publish negative stories
News
New LDS domain name may spark brand war over ‘Church of Jesus Christ’
News
Latter-day Saints, NAACP collaborating on inner-city initiative
News
Mormon leader: Nicknames for faith are ‘victory for Satan’
Flunking Sainthood
I’m a Mormon! But I’m not supposed to call myself that anymore.
© Copyright 2020, Religion News Service. All rights reserved. Use of and/or registration on any portion of this site constitutes acceptance of our User Agreement and Privacy Policy, Privacy Statement and Cookie Notice. The material on this site may not be reproduced, distributed, transmitted, cached or otherwise used, except with the prior written permission of Religion News Service.