OKLAHOMA CITY (RNS) A lesbian student who married her partner was expelled from an Oklahoma university one semester shy of her sports management degree. 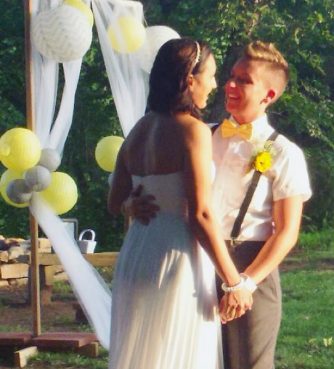 Christian Minard, 22, attended Southwestern Christian University, a school affiliated with the International Pentecostal Holiness Church in Bethany, Okla. As part of her admission requirements, she signed a lifestyle covenant that prohibits “homosexual behavior.”

Minard, who belongs to an Evangelical Lutheran Church in America congregation in Oklahoma City, is a Christian, but her decision to marry her partner, Kadyn Parks, put her at odds with the school’s lifestyle covenant.

The two were married in Albuquerque, N.M., on March 17. On Wednesday (July 9), a letter addressed to Minard  from Brad Davis, the school’s vice president of student life, arrived at her parents’ home, telling her she was being expelled.

“I was informed that you recently married someone of the same sex and saw a few pictures from Facebook,” Davis wrote. “Of course, this is opposing to our view as an International Pentecostal Holiness denominational university as well as the Lifestyle Covenant that all students must agree and sign.”

The expulsion leaves Minard in a difficult position.

“There isn’t a similar program at an area university, so I’d have to change my program of study,” Minard said. “And, being one semester from graduation means I have taken all my electives. I’ll lose all those credits if I transfer.”

The International Pentecostal Holiness Church is headquartered in Bethany, and the school sits adjacent to the world headquarters building. The denomination has consistently opposed homosexuality and same-sex marriage.

The lifestyle covenant states that students may be required to withdraw for violating certain provisions of the covenant, including prohibitions on “homosexual behavior,” harassment, sexual misconduct, pornography, alcohol, tobacco and other “sins.”

Minard said she is aware that her relationship violates the covenant, but she is troubled at the inconsistent application of the rules, saying she believes she was singled out for being a married lesbian.

“Students violate parts of that covenant all the time, but they don’t get expelled,” she said. “I didn’t even get a hearing, just a letter to my parents.”

Connie Sjoberg, provost at the university, declined to comment on specifics of the situation, citing the Family Educational Rights and Privacy Act of 1974, a federal law that prohibits colleges from disclosing information about students, even to parents.