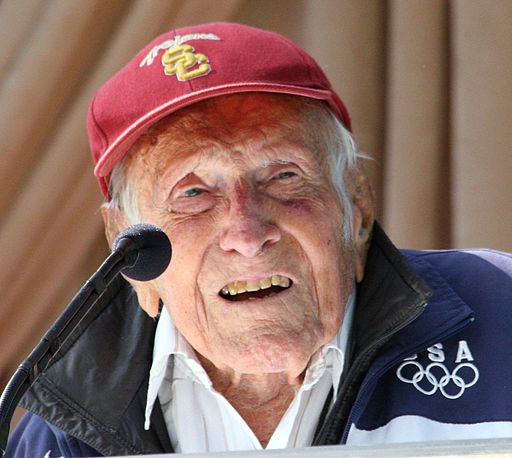 Zamperini at the announcement of the Grand Marshal of the Tournament of Roses - Photo via Wikimedia Commons (http://bit.ly/1moNF5I)
July 11, 2014
Laura Turner

Zamperini at the announcement of the Grand Marshal of the Tournament of Roses - Photo via Wikimedia Commons (http://bit.ly/1moNF5I)

"Don't screw this up, Angelina Jolie!" was the collective sentiment of Unbroken readers who heard that the actress was going to be directing the book's film adaptation. After her, ah, misstep with In the Land of Blood and Honey, the moviegoing public weren't so sure we could trust her. But the Unbroken trailer, out this week, looks like it might be her shot at redemption behind the camera.

It was not so long ago that I sat in a room with a thousand or so other people and watched, captivated, as Louis Zamperini spun a web around us with his presence and with his words. The kid whose presence at the 1936 Olympics had its roots in his quick sprints away from police in Torrance, California, was now 95 and mostly wheelchair-bound. When he was greeted with thunderous applause, Louis (he was the type to be called by his first name; familiarity was his way) raised his red and gold USC cap in the air and waved it in the direction of the audience. His enthusiasm, cliche as it may be to say, was contagious. And that's one of the things that is so powerful about this man; that his life could transcend cliche and make meaning out of words that, said by anyone else, would ring hollow.

Zamperini went to war in 1941 as a bombardier in the Pacific. After a year and a half of service, he and his crew crashed into the ocean nearly a thousand miles west of Oahu. The three men who survived floated for 47 days. Two of them made it, including Zamperini, only to be captured by the Japanese Navy on landing in the Marshall Islands.

The rest of the story is one of survival against all odds and incredible, aching, brilliant resilience. Unbroken is the story of the resilience of the human spirit, and not only on the part of Zamperini--Laura Hillenbrand, who is also the author of Seabiscuit, has Chronic Fatigue Syndrome and rarely leaves her home. But her sense of physical limitation has led to her incredible gift for intellectual exploration, as she told The Washington Post: "I'm looking for a way out of here. I can't have it physically, so I'm going to have it intellectually."

Zamperini and Hillenbrand spoke over the phone for seven years while she researched the book, and it was only after he read an interview with her that he understood why they hadn't spoken in person. Their friendship grew deep--he gave her one of his Purple Hearts, and she pressed him to share more of the story he thought he had exhausted in his memoir, Devil at my Heels.

Zamperini's return from being held as a prisoner of war was marked by a little-understood condition--Post-Traumatic Stress Disorder--and his relationship with his new wife deteriorated quickly as he found himself waking up and choking her in the middle of the night. It was at the second night of a Billy Graham crusade that Zamperini accepted an altar call, walking to the front of the tent.

"I dropped to my knees and for the first time in my life truly humbled myself before the Lord,” Zamperini wrote in Devil at my Heels. “I made no excuses. I did not rationalize, I did not blame.”

There are very few people in the world who can understand any of Zamperini's plight; fewer still who knew the man behind the story. But he could offer up phrases like, "To persevere is important to everybody," and, "Don't give up; don't give in," and they really meant something because he had lived a life staked on their truths.

Zamperini died July 3rd of pneumonia at age 97. The film will be a small reminder of the man himself, but I'm so glad we have it.