(RNS) Did the Hobby Lobby decision make you so mad you could knit a brick?

That’s the question behind a new protest spearheaded by the Secular Coalition for America, an umbrella advocacy organization of more than a dozen atheist and humanist groups. The coalition wants anyone upset by the Supreme Court’s ruling last month that granted corporations religious exemptions in covering women’s contraception to knit or crochet rectangles, or “bricks,” to shore up what it sees as the crumbling wall of separation between church and state.

If organizers collect 400 bricks, they will carry them to the steps of the Supreme Court. If they collect 800, they will deliver them to Congress. And if they collect 1,200, they will walk over to the White House and hand them over to President Obama’s staff.

“People tend to be impacted when they see a visual demonstration, and that is what this is,” said Lauren Anderson Youngblood, the coalition’s director of communications. “It’s a visual demonstration of people’s anger about this decision and a constructive way to show lawmakers that they have the ability to change it.” 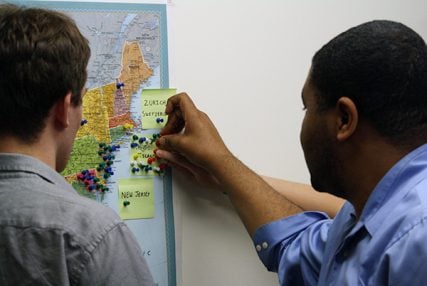 Secular Coalition for America intern Antonio Thomas, right, and other interns keep track of where the knitted bricks sent by people unhappy with the Supreme Court’s Hobby Lobby decision are coming from.

The “Knit a Brick” campaign, which kicked off on July 2, has been so successful that organizers have extended the deadline to receive them through the mail through Aug. 5. The bricks — each about 6 inches by 3 inches and made of red or reddish yarn – are arriving at the rate of 25 or more a day, Youngblood said. Some have reached the coalition’s office in Washington from as far away as South Korea, Japan and Switzerland.

“I am shocked at where some of these bricks are coming from,” Youngblood Anderson said. “They have been coming from places where people are not affected by this decision but are passionate enough about the implications that they are willing to knit a brick.” 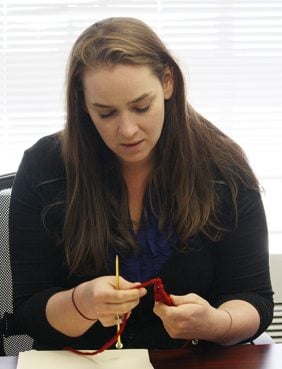 Secular Coalition for America Director of Operations Austin Cooper knits a brick in her Washington, D.C. office on July 17, 2014.

Not all the bricks are coming from atheists and humanists, either. Austin Cooper, the coalition’s director of operations, said members of her traditional Catholic family are so committed to secularism they made 19 bricks last weekend and gave them to her to bring in to the office.

“This this decision kind of united and galvanized the my family members,” Cooper said. “Religion can sometimes be a divisive issue for us, but they could see the far implications of the decision.”

Other groups have engaged in protest knitting. In 2012, “Government Free VJJ” organized people to knit pink uteruses for male lawmakers who were making laws regarding women’s contraception. “Wool Against Weapons” is a British organization that knits to protest nuclear arms factories, and Australia’s “Knitting Nannas Against Gas” rallies grandmothers (and others) to knit in protest of gas mining.

And the yarn-challenged need not fear. For a donation of between $10 and $100, a coalition staff member — from the newest intern to the group’s president  — will act as a surrogate knitter.

Of course, once the individual bricks are collected, they must be shaped into a “wall” by sewing them together — a task most knitters hate and try to avoid.

“Yeah,” Youngblood said, acknowledging the tediousness of the task, which coalition staffers will undertake. “We were looking at them yesterday and going, ‘Holy mackerel, now we are going to have to put all these together.’ But it will be worth it.”