VATICAN CITY (RNS) It began with the murder of an innocent 3-year-old boy who burned to death in his grandfather’s car in a Mafia ambush in January. Pope Francis was so shaken by the death of Nicola "Coco" Campolongo that he spoke out against the ferocity of the crime and those behind it. 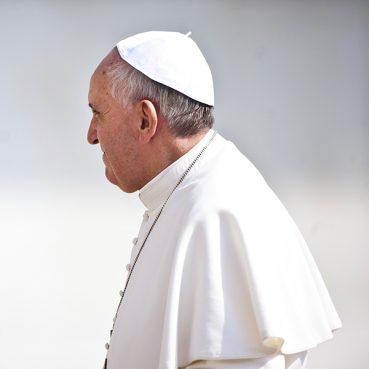 But he didn’t stop there. In June, the outspoken pontiff traveled to the southern Italian town where the murder took place and accused Mafia members of pursuing the “adoration of evil.” Then he went one step further.

"They are not with God," Francis said during his visit to the nearby town of Sibari in the region of Calabria where the global crime syndicate ‘Ndrangheta is based. "They are excommunicated!"

At a local prison there, Francis embraced Coco's father and two grandmothers and declared “this evil must be fought and distanced.”

Now, Francis is about to visit the Mafia stronghold of Caserta, near Naples, on Saturday (July 26). With his second trip to the heart of Italy's Mafia country, experts are debating the impact of his uncompromising stance and what it means for his papacy.

“I think it’s significant because this society is divided,” said Philip Willan, the British author of "The Vatican at War," which was released last year and looks at relations between the Holy See and organized crime against the backdrop of the Cold War.

“The church has been divided over what sort of stance to take against organized crime. When the pope puts his weight decisively behind the people fighting that battle, he gives them extra strength and encouragement.”

For a pope who has taken such a strong stand on poverty, social justice and inequality, his approach to the Mafia is perhaps not so surprising. But in this country where the Catholic hierarchy and the Mafia have enjoyed a cozy relationship for years, the Argentine-born pope is shaking things up and setting new boundaries.

“I think it’s simply his desire to be coherent with the Christian message; he sees organized crime as radically incompatible with Christianity,” Willan said. “And he is reaffirming that this has been forgotten or watered down in the past.”

Since Francis made his controversial excommunication pledge, even the Vatican itself sought to backtrack, saying Mafiosi were not being formally excommunicated under church law. One prison chaplain, the Rev. Marco Colonna, told the Italian daily La Repubblica that he believed the pope was simply appealing for redemption. In turn, he said, many convicted Mafiosi were confused by Francis' message and refusing to come to Mass in the prison.

“I tried to explain to them that the church doesn't kick anyone out, and after a few days of reflection, I told them that they would continue to receive the sacrament,” Colonna said.

But the pope’s stance seems to have given other clerics more courage. One bishop in Calabria called for a 10-year moratorium on naming godfathers at baptisms in a bid to stop Mafia members from spreading their influence.

The church and the Mafia faced off again in July when another bishop ordered an end to religious processions after hundreds of people carrying a statue of the Madonna bowed in front of the house of a powerful godfather.

Bishop Francesco Milito questioned the faith of those who saluted Giuseppe Mazzagatti, an 82-year-old convicted murderer, describing it as a "gesture of blasphemous devotion."

Catholicism has always been embedded in the secret rituals and practices of the Calabrian Mafia. Newcomers swear allegiance to and carry pictures of St. Michael the Archangel, the patron saint of warriors. Bosses have been known to decorate their underground bunkers with crucifixes and even hold their secret summits in Christian sanctuaries.

Enzo Ciconte, one of Italy’s top Mafia experts, said he believed many Mafiosi used religion simply as a means to gain social approval and advance their criminal operations. He said the actions of the pope could drive a wedge between the Mafia and those who are genuine believers.

“From this point of view there is no doubt that the words of the pope are like a boulder that will be difficult (for the Mafia) to overcome,” he said.

Francis is not the first pope to speak out, and one crime fighter said he may face repercussions.

In 1993, St. John Paul II warned members of the Sicilian Mafia that they would "one day face the justice of God." They responded with vicious bomb attacks against several churches, including the Basilica of St. John Lateran, considered the seat of the pope as the bishop of Rome.

Last fall, a local prosecutor in Calabria warned that Francis' focus on rooting out corruption in the Vatican's financial networks could subject him to death threats from the Mafia. “If the godfathers can find a way to stop him, they will seriously consider it," prosecutor Nicola Gratteri said. The Vatican later said there was "absolutely no reason for concern."

Ciconte said he did not believe the pope was under threat.

“The Mafia is not stupid,” he said. “It is not worth it for the Mafia to attack the pope. They will look for ways to pressure the faithful or will stop giving money to the church.”