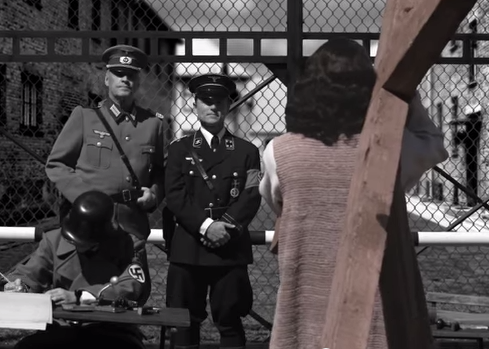 That Jew Died for You

If you believe that Jesus Christ is your Lord and savior, you’re probably a Christian. Unless you belong to the fringe group Jews for Jesus. In which case you’re probably an evangelical Christian who claims Judaism despite the categorical rejection of other religious and secular Jewish groups. You’re basically a black sheep/trojan horse with a not-so-secret mission to convert Jews to Jesus. Sneaky.

Disowned by Jews and ostracized by most Christians who understand your mission but not your identity, why not go for broke and exploit the memory of six million dead Jews in a floptastic attempt to convert their descendants to your way of thinking?

Jews for Jesus did just that in a video released this spring. Needless to say, it wasn’t pretty.

In That Jew Died for You, a low-budget YouTube clip as cringeworthy as Innocence of Muslims, Jewish women and children are separated outside a Nazi extermination camp in Poland, 1943. Those sent to the right go to work camps. Those to the left? The gas chamber. But wait! Who’s that in the burlap cape holding a digitized crucifix? Why it’s Jesus, labeled “Just another Jew,” sent to the “showers.”

“Jesus has often been wrongly associated with the non-Jewish, anti-Semitic perpetrators of the Holocaust. As a Jew himself, he should instead be identified with the six million victims. In reality, had he lived in Europe at the time, Jesus might well have suffered the same fate of those who perished in the concentration camps.”

In an accompanying video rationalizing the clip’s existence, a narrator says “we believe that the Holocaust, perhaps more than any other event or topic, has kept Jewish people from being open to considering Jesus as the Jewish messiah.”

Or maybe, just maybe, most Jews are Jewish because they are Jewish i.e. not Christian. If Jews for Jesus can be so oxymoronic, I’m allowed a tautology or two.

Laura Janner-Klausner, senior rabbi to the Movement for Reform Judaism in London, called the video “theological pornography” and accused Jews for Jesus of “using, misusing and abusing images of the Holocaust to make a false claim.”

“The Holocaust was about ending Judaism and ending Jews,” she said. “They are doing the same theological message because they believe, just the same as very extreme conservatives, in supersessionism,” the idea that Christianity renders Judaism redundant, null, void.

Furious about the message, Janner-Klausner told Julia Pascoe, UK director at Jews for Jesus, “If you absolutely understand how offensive [the video] is, take it off the Internet.”

Was Rabbi Laura’s request reasonable? Absolutely. She didn’t call for YouTube to remove the video or for governments to block it. She merely asked Jews for Jesus to acknowledge that many viewers consider the video to be offensive and encouraged them to remove it on their own accord.

But it’s not quite that simple. Janner-Klausner says Jews for Jesus “believe” in supersessionism. Beliefs by their very nature are difficult or impossible to prove. If Jews for Jesus genuinely believe their message to be true—not the part about Jesus time traveling to Auschwitz but about Jews rejecting Jesus as the Jewish messiah because of Holocaust scars—we’ve got one set of beliefs and sensitivities pitted against another.

So what should be done about the video? Sorry to disappoint, but it’s really none of my business.

Before moving to Index on Censorship and RNS, I helped launch Free Speech Debate, Oxford University's interactive platform for free expression. FSD’s seventh principle clearly states, “We respect the believer but not necessarily the content of the belief.” Principles of religious freedom generally hold that individuals and groups are entitled to express their beliefs as long as doing so does not seriously harm themselves or others.

In this case, some people were offended by Jews for Jesus’ beliefs and message. Jay Michaelson at the Forward called That Jew Died for You “the most tasteless YouTube video ever.” Fair enough, but matters of taste and offense should not be grounds for censorship if speech is not criminal and does not represent clear and present dangers likely to incite imminent violence. These are classic American criteria, yes, but the basic conditions they address apply broadly.

That Jew Died for You represents Holocaust fiction, not Holocaust denial, which is separate and complicated legal terrain in much of Europe. The fact that some find the video’s message to be hurtful is not a good enough reason to stop Jews for Jesus from sharing its beliefs, no matter how flimsy or firmly held they happen to be.

The best course of action for those offended by the video’s message is to follow Janner-Klausner’s example. Speak out. Share alternative views. Create your own YouTube video explaining why you find That Jew Died for You so offensive. As Free Speech Debate makes clear, dialogue is often better than censorship at countering messages you oppose.