PARIS (RNS) Amid mounting protests in Europe against the Gaza conflict, political and religious leaders in the region have sharply denounced anti-Semitism within their borders. 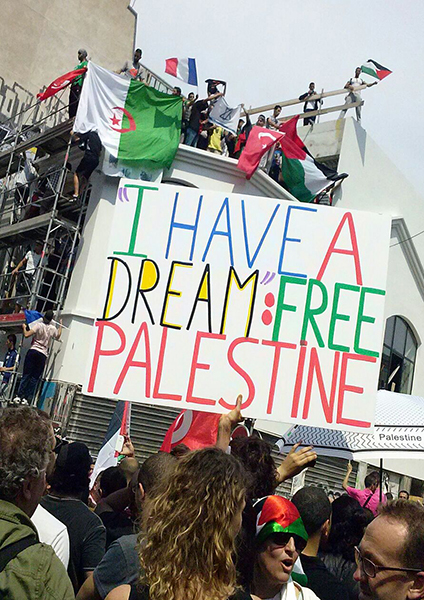 A pro-Palestine rally takes place in the Barbes neighborhood of northern Paris.

“Anti-Semitic rhetoric and hostility against Jews, attacks on people of Jewish belief and synagogues have no place in our societies,” the foreign ministers of France, Germany and Italy said in a statement Tuesday (July 22) from Brussels.

Fears of escalating unrest are perhaps sharpest in France, home to Europe’s largest populations of Jews and Muslims. Many have roots in North Africa, and violence in the Middle East resonates strongly here. Thousands defied a government ban against Paris-area protests over the weekend, staging pro-Palestinian rallies that degenerated into violence.

“We have had eight synagogues attacked. We have had shops attacked,” said Roger Cukierman, head of the Representative Council of French Jewish Institutions. “We have heard crowds shouting death to the Jews — not death to Israel.”

Muslim and Catholic leaders also denounced the violence at an interfaith ceremony late Monday in the Paris suburb of Sarcelles, where a synagogue and Jewish businesses were attacked.

France’s government has cracked down, arresting dozens in recent days and vowing a zero-tolerance policy toward anti-Semitism.

French authorities also warn that extremist groups are trying to capitalize on public anger over Gaza, at a time of growing alarm over French youths joining conflicts in Iraq and Syria.

Beyond events in the Middle East, France also remains haunted by its World War II past — memories that resurfaced last weekend, as the country commemorated the 1942 rounding up and deportation of thousands of Paris-area Jews under the Vichy regime.

Opinion
55 years ago, a cardinal’s ‘special reverence’ for the Jews redeemed ‘Nostra Aetate’
Martini Judaism
‘Borat’ is dead serious
Opinion
Against the darkness: Remembering Pittsburgh’s Tree of Life shooting
News
Two years after Pittsburgh shooting, solemn anniversary marked online
News
French police operations underway after beheading of teacher
© Copyright 2020, Religion News Service. All rights reserved. Use of and/or registration on any portion of this site constitutes acceptance of our User Agreement and Privacy Policy, Privacy Statement and Cookie Notice. The material on this site may not be reproduced, distributed, transmitted, cached or otherwise used, except with the prior written permission of Religion News Service.