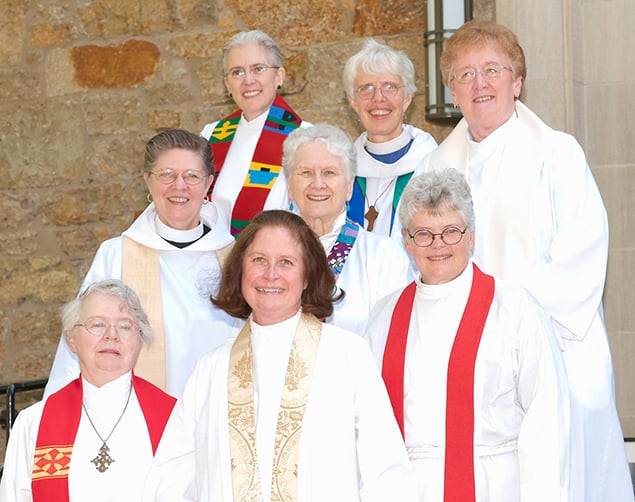 Pictured here are some of the first women ordained in the Episcopal Church. First row, from left, Alison Palmer and Lee McGee. Middle row, Nancy Wittig, Alison Cheek and Merrill Bittner. Back row, Emily Hewitt, Carter Heyward and Marie Moorefield Fleischer. (Alison Palmer and Lee McGee were ordained in Washington in 1975.) The picture was taken at Episcopal Divinity School in May 2004 during a celebration of the life and courage of the Rt. Rev. Robert DeWitt.

WASHINGTON (RNS) On July 29, 1974, in Philadelphia, 11 women broke rank and were ordained as the first female priests in the Episcopal Church. They became known as the “Philadelphia Eleven.”

While there was no church law explicitly prohibiting the ordination of women, there also was no law allowing it. After the Philadelphia protest at the Church of the Advocate, the 11 women were deemed “irregularly” ordained, and Episcopal bishops warned the church not to recognize the women as priests.

Two years later, the Episcopal Church’s General Convention — under pressure from the events in Philadelphia and elsewhere — affirmed and authorized the ordination of women to the priesthood. Today, the church is led by Presiding Bishop Katharine Jefferts Schori, the first woman to lead a national branch of the worldwide Anglican Communion.

News
Saddleback Church’s ordination of women pastors to be considered by SBC committee
Follow us on Facebook!
Submit your photos to RNS