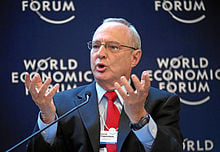 David Saperstein at the World Economic Forum in 2013

President Obama could hardly have made a better a decision than to nominate Rabbi David Saperstein as the country’s new Ambassador-at-Large for International Religious Freedom. The longtime director of the Religious Action Center of Reform Judaism, Saperstein is uniquely qualified to make a go of one of the trickiest jobs in the federal government.

Established as part of the 1998 International Religious Freedom Act (IRFA), the ambassadorship is a somewhat free-floating position charged with monitoring and promoting the most complex of human rights. As if the field of activity weren’t difficult enough to tread, the ambassador must cooperate with the independent U.S. Commission on International Religious Freedom (USCIRF), which IRFA also empowered to monitor and promote religious liberty around the world. And that’s not to mention reckoning with competing State Department priorities, White House imperatives, congressional preoccupations, and outside agitation from religious and human rights groups with agendas of their own.

Saperstein’s religious liberty bona fides is without peer. Two decades ago, he put together the coalition responsible for gaining all but unanimous passage of the Religious Freedom Restoration Act, the law that has recently become the darling of religious conservatives. In 1999, he was unanimously elected by his fellow commissioners to serve as the first chair of the USCIRF. He served on the first advisory council to Obama’s Office of Faith-based and Neighborhood Partnerships, and was a member of the task force to reform the office. No representative of a religious organization in Washington comes close to matching his credibility across the political spectrum.

In other words, there’s no good reason for the Senate not to quickly approve the nomination. But these days, the lack of a good reason does not stop Republicans from throwing monkey wrenches into the nomination process. Just last week, Sen. Ted Cruz put a hold on all ambassadorial appointments to protest the Federal Aviation Administration’s decision to suspend U.S. airline flights to Israel.

Since the resignation of Suzan Johnson Cook last year, the international religious freedom lobby has been agitating for the Obama Administration to appoint a new ambassador, with GOP partisans contending that its failure to do so demonstrates a lack of commitment to religious liberty. This appointment has been worth the wait. The question is whether the partisans think the position is as critical to fill as they say it is, or if they’ve just been interested in scoring debaters’ points.