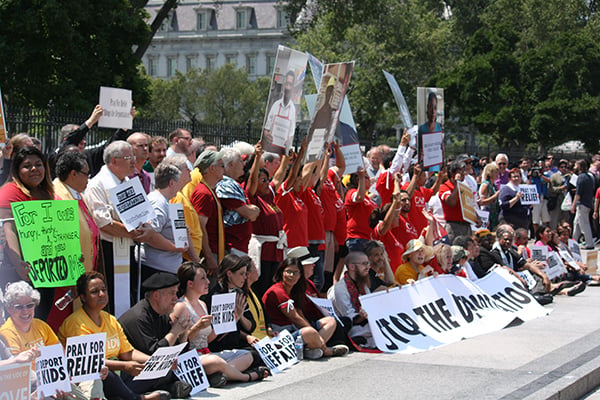 WASHINGTON (RNS) More than 100 religious leaders and activists were arrested Thursday (July 31) in a White House protest aimed at halting deportations and aiding immigrants living in the U.S. illegally.

Hundreds of faith leaders and immigration activists protested in front of the White House on July 31, 2014.

The U.S. Park Police completed the arrests of 112 people by 3 p.m., charging each with “blocking passage” on the sidewalk outside the White House, a misdemeanor, said Sidney Traynham, a spokesman for Church World Service.

Each went through a “post and forfeit” process, paying $50 in cash and forfeiting their right to a trial.

By 5:15 p.m., all of the people who had been arrested had been released from a processing center in the Anacostia neighborhood of Washington.

United Methodist Bishop Minerva Carcano of Los Angeles spoke at a rally before more than 100 protesters were arrested in front of the White House on July 31, 2014. They sought to halt deportations and aid immigrants living in the U.S. illegally.

“We are here because we are not hearing a moral voice coming from the White House,” said United Methodist Bishop Minerva Carcano of Los Angeles. “This is a day of justice. Let us be that moral voice.”

Sister Eileen Campbell, whose Sisters of Mercy order has a mission to help the vulnerable, took a step she’d never taken in her 67 years — joining others in the act of civil disobedience to protest 1,100 deportations a day and seek relief for 11 million immigrants living illegally in the country.

With Congress failing to act on immigration, she said, and children massing at the nation’s Southern borders, it was time to do something.

“We have exhausted every other means to do this and so now we really have to rely on the executive authority of our president,” said Campbell, who has sisters in her order affected by the violence in Central American countries from which the children are fleeing. 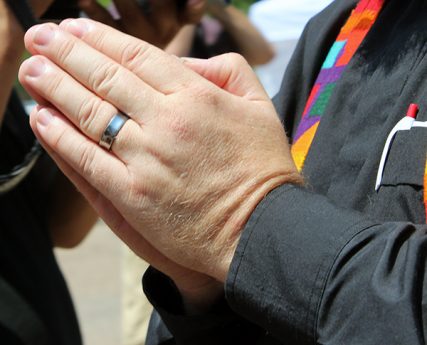 A protester clasps his hands in prayer during a march of religious leaders and immigration advocates towards the White House on July 31, 2014. They sought to halt deportations and aid immigrants living in the U.S. illegally.

“I think standing outside the White House will make a difference,” she said as she rode in a van with other leaders past the Capitol and toward the White House.

White House Press Secretary Josh Earnest criticized congressional leaders for failing to pass immigration reform and “instead driving an approach that is about rounding up and deporting 11 million people, separating families and undermining (the Department of Homeland Security’s) ability to secure the border.”

Other first-time arrestees voiced a mix of hope and desperation.

“I’m ashamed of the way some of our lawmakers are refusing to grant people the opportunity to live and work and contribute to our society,” said the Rev. Thomas Bain, a retired United Methodist minister and community activist from Kailua, Hawaii, as he sought a cup of coffee before leaving for the protest. A woman signs a release form at the United Methodist Building before taking part in a protest in which more than 100 religious leaders and immigration advocates were arrested at the White House on July 31, 2014.

The Rev. Hector J. Hernandez, a Christian Church (Disciples of Christ) minister from Indianapolis, said he was taking part for the first time for one reason: the children.

“I have seen firsthand how destructive this is,” said Hernandez, a marriage and family counselor who knows families separated by immigration mandates. “Children are innocent — period.”

The Rev. Susan Frederick, a Unitarian Universalist minister from Phoenix, joined a group of 10 that traveled via subway to the White House.

“Faith calls us to love, not to fear,” she said. “Crossing a border to protect and love your family is not a crime. Undocumented immigrants should not be treated as criminals.”

In the morning before their protest, the activists were reminded to eat lunch, use the bathroom and wear their white armbands. Clergy were told to bring their stoles and wear their collars. And everyone was warned not to lay hands on arresting officers.

“Just remember that the target of our demonstration today is inside the White House,” advised Gustavo Andrade of Casa de Maryand. “That’s the person that can give us what we want.” 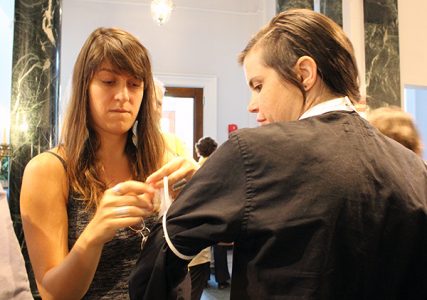 Melissa Bowe of National Justice for our Neighbors, left, gives Nikki Kleinberg, a United Methodist deacon from Philadelphia, her armband ahead of arrests of more than 100 protesters in front of the White House on July 31, 2014. They sought to halt deportations and aid immigrants living in the U.S. illegally.

After a rally in Lafayette Park across from the White House, the protesters willing to be arrested sat and stood in three rows. They sang “We Shall Overcome” and chanted “Si Se Puede” (“Yes We Can”) while holding signs declaring “Pray for Relief” and “Stop the Deportations.”

A police officer warned them three times by bullhorn that they were violating the law when they did not move from the sidewalk.

“You are now under arrest,” an officer said. “You may not leave the secure area.”

As the protesters were put in plastic handcuffs one at a time, hundreds more who were fenced off across the street in the park cheered them on.

Antino Aleman, an undocumented man from El Salvador, said before joining the arrestees he was there “to ask the president for him to do what is better for all of us.”

His son, Erick Aleman, 17, joined the protest, but from across the street in the park.

“It’s difficult and it’s not,” he said of protesting at his age. “But you gotta fight for what you want.”

Click on any photo to begin this slideshow of RNS images by Heather Adams. 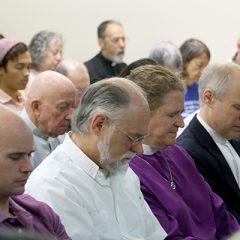 Attendees bow their heads before an informational meeting in Washington, D.C., on July 31, 2014. More than 100 faith leaders and immigration activists were arrested at the White House and charged with blocking passage during the group’s protest of the daily deportations of undocumented immigrants in the U.S. 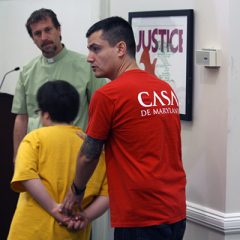 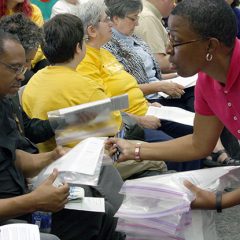 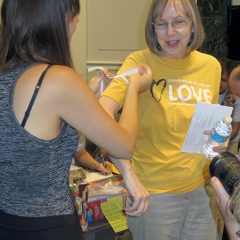 Sandy Weir, 63, a Unitarian Universalist, of Phoenix, receives a white armband on her right shoulder, symbolizing her acceptance to be arrested. 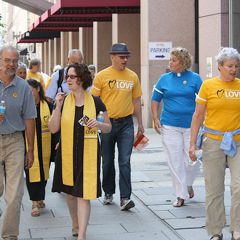 Faith leaders and immigration activists walk from a training meeting to the subway, en route to a protest at the White House. 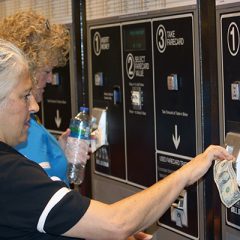 Christina Sillari, 51, of Portland, Maine, and the Rev. Carie Johnsen, 50, of Augusta, Maine, purchase Metro passes for transportation from the United Methodist Building to the White House. 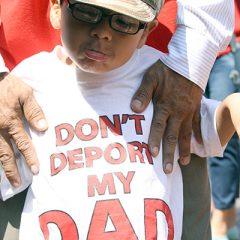 Michael Claros, 5, joined hundreds of faith leaders and immigration activists at a protest in front of the White House on July 31, 2014. (RNS photo by Heather Adams) 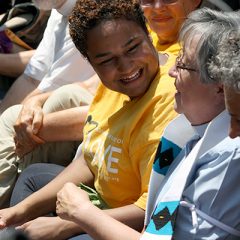 Rafaelina Veras, 29, a Unitarian Universalist, chats with other people of faith before heading to a protest in front of the White House on July 31, 2014. Hundreds of faith leaders and immigration activists protested in front of the White House on July 31, 2014. 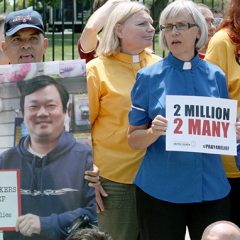 Antino Aleman, 45, left, is one of the hundreds that participated in an immigration protest in front of the White House on July 31, 2014. He is undocumented and was willing to be arrested, he said. Hundreds of faith leaders and activists, including Crystal Silva-McCormick, of El Paso, Texas, participated in an immigration protest in front of the White House on July 31, 2014. 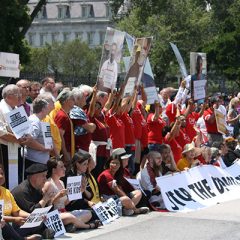 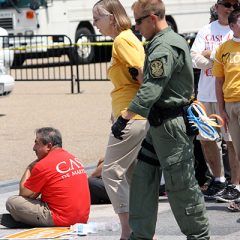 Sandy Weir, 63, a Unitarian Universalist, of Phoenix, is arrested by the United States Park Police on July 31, 2014, during an immigration protest.

Religion Hub
Christmas isn’t always holly jolly – even some of its best-loved songs are bittersweet
Follow us on Facebook!
Submit your photos to RNS