(RNS) Uganda’s top Anglican leader criticized the constitutional court for striking down the country’s controversial anti-gay law on a technicality, saying the law is still needed to protect children and families from Western-imported homosexuality. 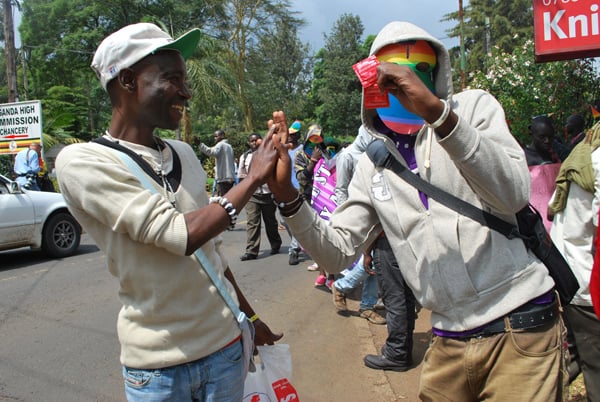 Gay rights activists share a light moment during a demonstration in Nairobi against Uganda’s Anti-Homosexuality Act, 2014, in February. RNS photo by Fredrick Nzwili

A five-judge panel on Friday (Aug. 1) declared the Anti-Homosexuality Act, 2014, null and void since it was passed by parliament without the required quorum. Dismissing the law on a technicality maintains the possibility that it could be revived in a different form.

Anglican Archbishop Stanley Ntagali called the decision a disappointment for the Church of Uganda, religious leaders and many Ugandans.

“The ‘court of public opinion’ has clearly indicated its support for the Act, and we urge Parliament to consider voting again on the Bill with the proper quorum in place,” Ntagali said on Monday.

Uganda’s religious leaders had widely supported the law, but opposed an earlier clause threatening the death penalty for some homosexual acts. Most Ugandan church leaders say homosexuality is against God’s order and African cultures. Such a law was needed to protect families, children and youth, the leaders stressed.

“I appeal to all God-fearing people and all Ugandans to remain committed to the support against homosexuality,” said Ntagali, whose church cut ties with the Episcopal Church, the American branch of Anglicanism, after the election of an openly gay bishop in 2003.

Gays and lesbians celebrated the verdict as their victory and a sign of freedom, but analysts view it as a start of a long battle for gay rights in the country.

“I am no longer criminal,” Kasha Jacqueline, a prominent gay activist, tweeted. “We have made history for generations to come.”

David Bahati, the member of parliament who authored the bill, said the government’s attorney general will petition the Supreme Court over the ruling, giving the greatest sign that the law will be revived.