(RNS) Senior leaders in Iraq’s minority Yazidi community say their wives and daughters, forcibly held by Islamic militants, are being given a choice: Convert to Islam and marry jihadists — or else.

Mirza Dinnayi, a senior Yazidi leader and a former adviser on minority affairs to the Iraqi president, said he has spoken on the phone with several women who cry out to him: “I love my husband; my faith is Yazidi.”

Others have attested to harsh treatment bestowed on members of the religious minority by the Islamic State militant group since its gunmen captured parts of Iraq earlier this week.

As many as 200,000 Yazidis left their homes in the Sinjar region of northwestern Iraq. Untold thousands are believed dead and at least several hundred women and children are being held prisoners.

Meanwhile, tens of thousands are stranded on the Sinjar mountain range without access to food or water in an ongoing humanitarian crisis.

Even in a long history marred by persecution, this week’s tragic events stood out.

Prince Tahseen Said, the 81-year-old leader of the community, who has lived through many exiles and massacres, has called it the worst violence against Yazidis in his lifetime and beseeched the international community to intervene.

Smaller communities of Yazidis live in Syria, Armenia and Germany. 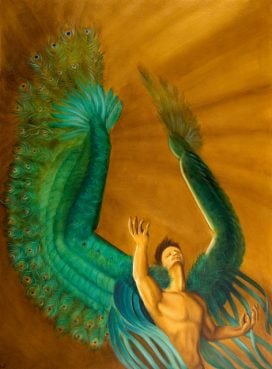 At their unique conical temples, they worship a peacock deity called Melek Taus and hold elaborate ceremonies that involve fire and water.

“Yezidism is a syncretic religion that takes from a variety of different traditions, some Zoroastrianism, Islamic and a little bit of animism,” said Austin Long, professor of international affairs at Columbia University in New York.  “It’s a mixed religion with a long-standing history in Iraq. Most are Kurds, ethnically.”

Through the centuries, Yazidis have often been persecuted by Muslims who say the faith is forbidden. In 2007, hundreds of Yazidis in Sinjar died in a series of massive explosions orchestrated against them by al-Qaida in Iraq — the precursor of the Islamic State.

In recent months, Sunni radicals have made huge gains in northern Iraq, killing thousands of Christians, Shiites and other minority religious groups. But the fall of Sinjar, which was being protected by the robust Kurdish militia, came as a surprise.

Since then, the Islamic State has continued to push into Kurdish territory and is now threatening Sheikhan, the other area where Yazidis are concentrated.

“We have thousands now fleeing,” said Dinnayi. “We have no help. No support from international community.”