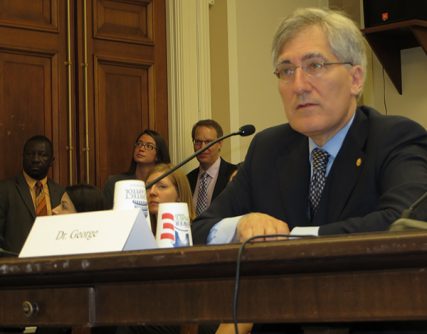 Robert P. George, chairman of the U.S. Commission on International  Religious Freedom, testifies before a House Foreign Affairs subcommittee on the state of religious freedom around the world on May 22, 2014. Religion News Service photo by Lauren Markoe

(RNS) A coalition of more than 50 religious leaders, led by mostly conservative Catholic, evangelical and Jewish activists, is calling on President Obama to sharply escalate military action against Islamic extremists in Iraq. They say “nothing short of the destruction” of the Islamic State can protect Christians and religious minorities now being subjected to “a campaign of genocide.”

“We represent various religious traditions and shades of belief,” the petition reads. “None of us glorifies war or underestimates the risks entailed by the use of military force.”

But they say the situation is so dire that relief for these religious communities “cannot be achieved apart from the use of military force to degrade and disable” the Islamic State forces.

The petition was organized by Robert P. George, a prominent Catholic conservative and Republican activist, and he was joined by a range of other leaders, many of whom are known for their hawkish views on foreign policy.

The signatories call on the U.S. to arm Kurdish forces in the north, which the administration has begun doing after weeks of intense debate over whether such a move would lead to the final breakup of Iraq into enclaves of Kurds and Sunni and Shiite Muslims.

“We further believe that the United States’ goal must be more comprehensive than simply clamping a short-term lid on the boiling violence that is threatening so many innocents in ISIS/ISIL’s path,” the signers say, using alternative acronyms for the Islamic State. “Nothing short of the destruction of ISIS/ISIL as a fighting force will provide long-term protection of victims.”

The statement follows reports that the U.S. is weighing a larger effort to protect refugees, one that could include putting troops on the ground in Iraq.

The petition also comes amid growing calls by religious leaders in Iraq and internationally for the global community to take more concerted action.

The Vatican on Wednesday (Aug. 13) released a letter that Pope Francis wrote to U.N. Secretary-General Ban Ki-moon appealing to the world community “to do all that it can to stop and to prevent further systematic violence against ethnic and religious minorities.”

While Francis called for “concrete acts of solidarity” by the U.N. and included security forces as part of the solution, he was careful not to promote a military response as the chief means for resolving the tragedy. Other Catholic officials in Rome and Iraq have said the U.S. airstrikes are viewed as necessary and morally justified but they are leery of actions that could lead to another U.S.-led military campaign.

The letter from the religious activists, mainly Americans, was much more forceful in calling for military action.

At the end of their statement, the leaders, some of whom backed the 2003 U.S. invasion of Iraq that led to years of violence, acknowledged that “our own nation is not without responsibility for the plight of victims of ISIS/ISIL genocide.”

But, they conclude: “The point is not to point fingers or apportion blame, but to recognize that justice as well as compassion demands that we take the steps necessary to end the (Islamic State) campaign of genocide and protect those who are its victims.”