(RNS) The death of beloved comedian Robin Williams has heightened awareness of suicide and its relationship to mental health problems. But many African-American churches quietly began educating members on the issue well before the Oscar winner’s death.

“A lot of times in the past, African-Americans have viewed severe depression and other mental illnesses as indicating a spiritual weakness,” said Tamara Warren Chinyani, an instructor with the “Mental Health First Aid” program. “We’re changing that paradigm around.”

The National Council for Behavioral Health introduced the program in the U.S. in 2008, with the goal of helping people learn how to spot signs and symptoms of mental illness. The program began its focus on African-American churches this year.

African-Americans are 20 percent more likely than non-Hispanic whites to report instances of serious psychological stress, according to the Department of Health and Human Services’ Office of Minority Health. And while more white teens commit suicide than their black counterparts, more African-American teens (8.3 percent) attempted suicide than their white peers (6.2 percent).

Some of the people leading the effort to build awareness about mental illness have seen its most tragic consequences up close.

Bishop William Young and his wife, Pastor Dianne Young, co-founded the National Suicide and the Black Church Conference about a decade ago after a member of their Memphis, Tenn., congregation shot and killed herself under a large cross on the church grounds. Photo courtesy of The Healing Center

Bishop William Young and his wife, Pastor Dianne Young, co-founded the National Suicide and the Black Church Conference about a decade ago after a member of their Memphis, Tenn., congregation shot and killed herself under a large cross on the church grounds. Fifty attended the first biennial meeting and about 500 attended the 2013 gathering, he said.

“We’ve been silent on issues that have been right before us all the time,” said William Young. “Because of our mainly not having knowledge of these different types of issues we have avoided it.”

In addition to the conference, the couple started “Emotional Fitness Centers” at 10 churches in Tennessee, in hopes they will increase access to services and reduce the stigma associated with therapeutic care.

“People will come to the church when they won’t go to a mental health center,” said the bishop, who attended a July launch of a broader new initiative called the Mental Health and Faith Community Partnership. 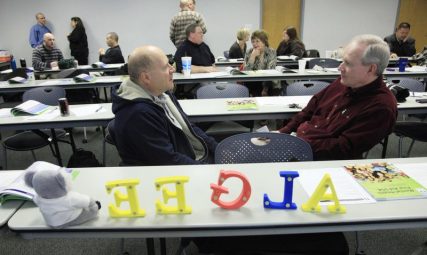 Dianne Young, the centers’ director, said 722 people were screened during the most recent fiscal year and 300 followed through with the plans they were given, some of which included hospitalization.

In Texas, the Hogg Foundation for Mental Health will begin an $850,000 grant program in October that will help 10 African-American churches educate congregants about mental health for the next three years.

“To an increasing degree, African-American faith-based leaders are no longer content with being behind the curve on mental health issues,” she said. “Pastors are excited about the chance to spread awareness about mental health in a way that capitalizes on their strengths as standard bearers in the community.”

Experts say many African-Americans have long been hesitant to pursue medical and mental assistance because of fears they may be discriminated against and because of recollections of notorious experiments on unsuspecting black men in the mid-1900s.

The Rev. Frankey Grayton of Washington, D.C., said it’s time for congregants and clergy to acknowledge their need to learn more about mental health and, when necessary, seek help. Photo courtesy of Edgewood Baptist Church

But the Rev. Frankey Grayton of Edgewood Baptist Church in Washington, D.C., which hosted Warren Chinyani’s recent training session, said it’s time for congregants and clergy to acknowledge their need to learn more and, when necessary, seek help.

“Quite frankly, we felt unprepared,” said Grayton, who learned of the training from another pastor who had participated. “But I don’t think that we as a community can ignore it.”

Now, his congregation is developing an action plan, which will range from offering in-house counseling to the bereaved, divorced and unemployed to determining when they need to call 911 or otherwise seek professional help.

Before she started working directly with congregations, Warren Chinyani trained about 100 clergy and lay people in two sessions last year sponsored by the Maryland affiliate of Volunteers of America.

The consultant, who used to attend a church in Michigan where a fellow member committed suicide about a decade ago, said she hopes more African-American congregations will step up to a greater role on mental illness, just as many have recently on HIV/AIDS where they’ve started clinics, health fairs and counseling.

As she shows videos of people who have recovered and supervises role-playing exercises to foster openness about mental health, she hopes the training will become as common as CPR.

“We want just as many people who are certified in CPR to become knowledgeable and equipped with the tools and skills necessary to help someone who may be experiencing a mental health crisis,” she said.