VATICAN CITY (RNS) China has reacted cautiously to a bid by Pope Francis to open new dialogue with Beijing, with some officials quick to warn the Vatican not to “interfere” with the country’s religion.

Catholic Church of the Saviour, also called Xishiku Church or Beitang, in the Xicheng District in Beijing, China.

On his return flight from a five-day tour of South Korea, Francis said he was ready to go to China — “For sure! Tomorrow!” — after receiving a positive response to two goodwill telegrams he sent to President Xi Jinping as the pope flew over Chinese airspace.

“We respect the Chinese people,” Francis told journalists on the return flight Monday (Aug. 18). “The church only asks for liberty for its task, for its work.”

That is still a huge challenge, as the Vatican has not had diplomatic relations with China since 1951. The Catholic Church in China is divided between an “official” church known as the Catholic Patriotic Association, answerable to the Communist Party, and an underground church that swears allegiance to Rome.

The state-run Catholic Patriotic Association was quick to respond to the pope’s overtures for greater dialogue, albeit with a warning.

“China will always safeguard its sovereignty and territorial integrity and it never allows foreign forces to interfere with religion. The Vatican should respect China in terms of the personnel of a diocese,” Liu Yuanlong, vice president of the association, told the state-run Global Times in a report also published in English.

The Chinese Ministry of Foreign Affairs is unhappy with the Vatican’s diplomatic recognition of Taiwan, while the Vatican is unhappy with Beijing’s strict control of religious institutions, particularly the appointment of bishops.

Zhuo Xinping, director of the Institute of World Religions at the Chinese Academy of Social Sciences, told another state-run outlet, China Daily, that he welcomed the pope’s move, saying Francis had been active in improving Vatican ties with Beijing since he was elected in March 2013.

Zhuo described the 77-year-old Argentine pontiff as “a friend of developing economies” with “special feelings” for people in those countries due to his Latin American origins. 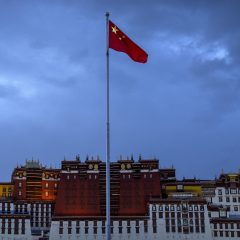