FERGUSON, Mo. (RNS) Ever since Michael Brown, a young, unarmed African-American, was shot by a police officer on Aug. 9, various crews have played a part in achieving the tentative peace that has taken hold of the St. Louis suburb once rocked by protests.

Some wear black T-shirts with large white letters that spell out “Peacekeepers.” Others dress in bright orange shirts and call themselves “Clergy United.” All acknowledge that the Nation of Islam has been a key player since the very beginning.

Last week, Capt. Ronald S. Johnson of the Missouri Highway Patrol, who took over the police security patrol in Ferguson, acknowledged on national television that the Nation of Islam and other groups — such as Black Lawyers for Justice — helped control the crowds on West Florissant Avenue. Others on social media pointed out that the Nation of Islam protected businesses from looters.

Yet, many find the Nation of Islam — a Muslim sect that dominated headlines during the civil rights era but has since diminished in prominence — problematic.

In some ways, Nation of Islam members are not unlike other Muslims. They worship Allah and pray five times a day. They also fast during Ramadan and require a pilgrimage to Mecca, or Hajj. But the Nation of Islam also calls for a separate nation for blacks, according to international representative Akbar Muhammad.

On Sunday (Aug. 24), Minister Louis Farrakhan, the national representative of the Nation of Islam, addressed Brown’s death directly from the religious group’s base in Chicago.

“In every city and town where black people live, black men are being shot down by police,” Farrakhan said. “The killing of Michael Brown is one of many.” Farrakhan also spoke of a government conspiracy against black youth.

Yet, despite controversial teachings, experts say Nation of Islam members do not advocate violence and are first and foremost interested in the thriving of African-American communities.

Despite its strong presence in Ferguson, the Nation of Islam, founded in 1930, is far from what it was at its peak in 1995, when Farrakhan managed to inspire hundreds of thousands of African-Americans to gather in Washington in what is known as the Million Man March. Experts estimate that current Nation of Islam membership is in the tens of thousands, though many more African-Americans may find the religion’s teachings inspiring.

Part of the reason for the dwindling numbers could be attributed to a 1970s break in leadership, where one faction of the Nation of Islam moved toward Sunni Islam under the leadership of Warith Deen Muhammad, while others chose to follow Farrakhan.

On Saturday, Aug. 16, the night when the curfew was first tested in Ferguson, Malik Shabazz, founder of Black Lawyers for Justice, marched up and down West Florissant flanked by Nation of Islam members, many of whom dressed up their suits with bow ties.

“Don’t worry about them,” Shabazz shouted into a megaphone, referring to the police. “Don’t get distracted.” At one point he raised his arm and yelled “Black power!”

In an effort to try to persuade demonstrators to obey authorities and go home, Shabazz cried, “We’re going to dominate the streets tomorrow.”

Those on the street praised the groups’ efforts.

“They’ve been doing a good job for the most part,” said Ronnie Robinson of the St. Louis City Police Department. “I don’t see anybody from the Nation of Islam causing any problem.”

St. Louis Alderman Antonio French, who has been at the protest site nightly, said Nation of Islam members had “a relationship with these young guys that few others do. Their presence makes us feel better about being able to keep the peace.”

But the late-night protesters haven’t always heeded the pleading of Nation of Islam volunteers.

On Saturday, Shabazz and others failed, despite a long night of effort, to persuade the hangers-on to go home.

“Michael Brown can’t go home, why should we?” some demonstrators yelled. “Ain’t no curfew for justice.”

Dozens of protesters moved to the middle of West Florissant holding their hands up in the air as curfew drew near.

Then, as if on cue, when the clock struck midnight, a torrential downpour descended on those left in the street. Demonstrators waited for the police.

Nation of Islam member J.A. Salaam called the rain an act from God. 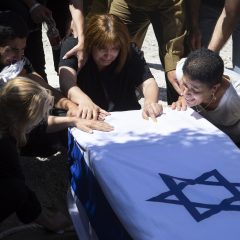 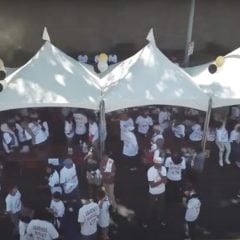 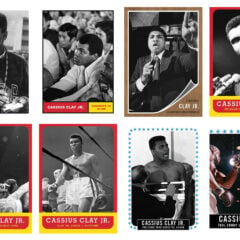