TORONTO (RNS) The open road has closed for motorcycle-riding Sikhs in Ontario. 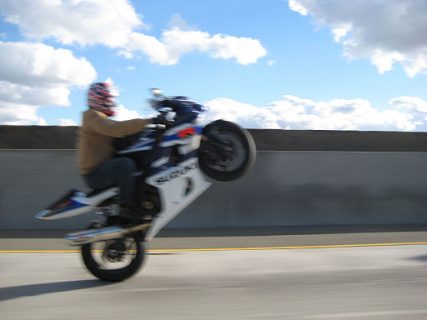 Motorcyclist doing a wheelie on the freeway in Ontario, Canada.

The province’s premier has informed Sikhs they are not exempted from motorcycle helmet laws.

In a letter this month to the Canadian Sikh Association, Ontario Premier Kathleen Wynne wrote that not wearing a helmet poses “a road safety risk.”

“Ultimately, the safety of Ontarians is my utmost priority, and I cannot justify setting that concern aside.”

The Sikh association said it had worked for years to get an exemption on religious grounds, stressing that devout Sikh men are required to wear turbans to cover unshorn hair, over which motorcycle helmets do not fit.

It noted that two Canadian provinces — Manitoba and British Columbia — as well as Great Britain do not require turbaned Sikhs to wear a helmet.

In jurisdictions requiring helmet use, mortality rates for motorcyclists have declined 30 percent, and head injuries have gone down 75 percent, she wrote.

She also cited a past Ontario court ruling that dismissed the case of a devout Sikh man who was ticketed for riding his motorcycle without a helmet. The court ruled that any violation of religious rights was justified because the helmet law saves lives and reduces public health care costs.

In a statement, the Sikh group said it is “deeply disappointed” in the government’s decision.

All four Sikh members of the provincial legislature supported the exemption, it pointed out.

“If nothing else happens, then (we) go to court or the Ontario Human Rights Commission,” Bal said.