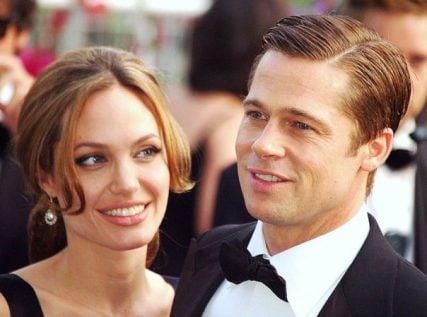 Angelina Jolie and Brad Pitt at the Cannes film festival in 2007. Photo by Georges Biard, via Wikimedia Commons.

(Never mind that Pitt said in 2006 that the couple would “consider tying the knot when everyone else in the country who wants to be married is legally able.”)

For many, this announcement is an opportunity to peer into the private lives of two famous people. And I won’t deny that I too indulge in celebrity news on occasion.

But the news of their wedding actually got me wondering about the ceremony itself: Who officiated it? What rituals did they use? Was there music?

Why do I care about the details of their ceremony? Because Jolie and Pitt are among the most famous nontheists in the world—and, to many people, the idea of a nontheistic wedding is still entirely alien.

In 2009, Pitt was asked if he considers himself to be spiritual or if he believes in a higher power. His response: “No, no, no! I’m probably 20 percent atheist and 80 percent agnostic.”

And in 2011 he said: “Many people find religion to be very inspiring… Myself, I found it very stifling. I grew up with Christianity and I remember questioning it greatly.”

Now, you may not care about Pitt and Jolie specifically, but the wedding between two very high profile atheists raises an interesting question for some: What exactly happens during a wedding ceremony for two atheists, agnostics, or otherwise nontheistic people?

As a Humanist chaplain and celebrant, I officiate nontheistic weddings—in fact, I’m working with several couples to plan their own nonreligious weddings right now.

Without referencing God or a universal spirit, the focus of the ceremony will be on the people getting married and those in attendance. Without needing to incorporate certain traditional rituals or work off of an established blueprint, we have the freedom to shape the ceremony around the couple as unique individuals who have their own story and aspirations, their own hopes and fears, their own views on love and commitment, and their own reasons for making such an important decision.

This isn’t to suggest that religious weddings can’t be unique or meaningful; I’ve attended quite a few and have been moved and inspired by many of them. But anyone who thinks that an atheistic wedding can’t also be rich in meaning probably hasn’t been to one.

Whatever their ceremony was like, I hope that Pitt and Jolie felt that it was a sincere representation of their love for one another and the other people in their lives.

But beyond that, I hope their wedding will be an opportunity for all of us to acknowledge the many ways in which people celebrate love—atheists included.