In Jewish communities throughout the Middle East, the Torah scroll is generally housed in a rigid “tik,” or case made of wood or metal. Originally covered with velvet and metal ornamentation, this tik suffered damage in the flood water. The architectural form of this tik and most other Iraqi examples resembles the silhouette of Iraqi minaret towers. Photo courtesy US National Archives and Records Administration
September 5, 2014
Lauren Markoe 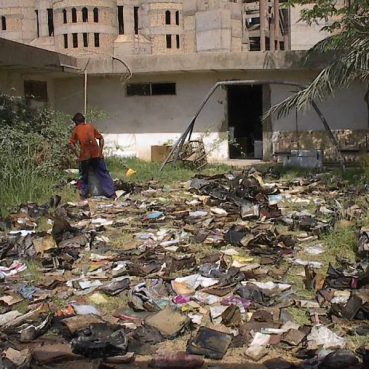 Workers attempted to dry the books and documents found in Iraq in 2003 by placing them outdoors. Photo courtesy of Harold Rhode via U.S. National Archives and Records Administration

WASHINGTON (RNS) After the U.S. Army rescued a trove of Jewish artifacts from the basement of Saddam Hussein's secret police headquarters, many American descendants of Iraq’s once vibrant Jewish community had an urgent question.

Is the U.S. going to return these artifacts to war-torn Iraq?

The answer was yes. Over the objections of many Jews whose families came from Iraq, the U.S. had agreed that the “Iraqi Jewish Archive,” painstakingly restored in a laboratory outside Washington, would return to Iraq in the summer of 2014.

But the summer of 2014 is nearly over, and the archive is still in the U.S. Now a new plan will delay at least some of the collection's journey back to Baghdad, where it had been discovered -- moldy and disintegrating -- in the flooded basement of the former dictator's intelligence headquarters.

According to the State Department, highlights of the archive -- exhibited in Washington and New York this year and last -- will soon embark on a tour of several more American cities.

Some see this extension -- at a time when much of Iraq is in chaos -- as an opportunity to revisit the question of the archive's destiny. They want its Torah fragments, prayer books, documents and photographs, dating from the mid-16th century to the 1970s, housed permanently among Jewish communities capable of caring for them.

"There is no regard for human life there now, so how can there be regard for our precious legacy?" said Carole Basri, vice president of the American Sephardi Federation, a group of Jews of Spanish, Portuguese, Middle Eastern and North African heritage. 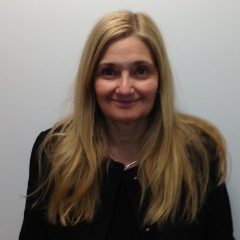 Today less than a handful of Jews live in Iraq, descendants of a 2,600-year-old civilization founded by exiled Israelites in what was then called Babylonia. In 1900, Jews composed a quarter of Baghdad's population. But most fled in subsequent decades, many to the newly formed state of Israel.

The State Department has sought to reassure those concerned about the archive that the Iraqi National Library and Archive has the desire and capacity to care for it and that the department has set aside money to train two Iraqi scholars in advanced preservations and exhibition techniques.

"This effort is to help ensure the continued care of these documents for future generations,” a State Department representative wrote in a recent email.

In May, the Iraqi Embassy in Washington reiterated its eagerness to have the archive back.

"We consider the history of Jewish communities in Iraq to be an integral part of the history of our country -- one that we honor and cherish -- and nothing can erase this history, nor change our commitment to preserving its memory," a press release read. 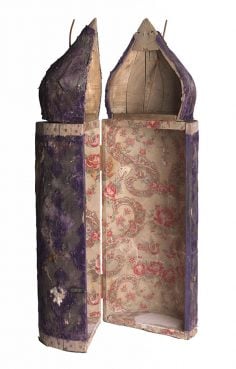 In Jewish communities throughout the Middle East, the Torah scroll is generally housed in a rigid “tik,” or case made of wood or metal. Originally covered with velvet and metal ornamentation, this tik suffered damage in the floodwater. The architectural form of this tik and most other Iraqi examples resembles the silhouette of Iraqi minaret towers. Photo courtesy of U.S. National Archives and Records Administration

The scarcity of Jews in Iraq attests to the severe and often deadly persecution they endured there, said Basri, whose great-grandfather was the chief rabbi of Baghdad and whose grandfather founded what became the last Jewish school in Iraq.

A report card from that school, which closed in 1972, is among the objects from the archive selected for the exhibit.

But other parts of the archive are slated to return to Iraq as originally planned, according to the State Department and the Iraqi Embassy. How soon is not clear.

The archive remains in the custody of the federal agency that restored it: the National Archives and Records Administration, which, according to the State Department, will consult with Iraqi officials and the World Organization of Jews from Iraq to determine when various parts of the archive will go back to Iraq.

As for the details of a U.S. tour of the archive, they are  "still being determined," according to the State Department.