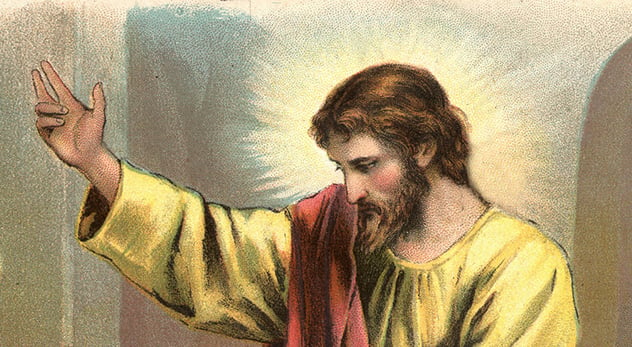 Imagine Jesus wearing a baseball cap, attending the Republican National Convention, celebrating American Independence Day, and advocating for another war in the Middle East. According to blogger Benjamin Corey, author of Undiluted: Rediscovering the Radical Message, this is the Jesus that conservative American evangelicals have created. As a result, many worship a domesticated Jesus and have diluted his radical good news.

Here, we discuss what it means to be “set apart,” the idolatry of certainty, and whether he’s just making the same old liberal arguments we’ve been hearing for decades.

RNS: Many evangelicals work to be “set apart” from culture, staying true to the fundamentalist roots of some denominations. But you say evangelicalism, has fallen prey to syncretism—the blending of culture with religion so that it’s difficult to distinguish them. Where do you see this?

BC: Over time, I’ve noticed syncretism in a variety of ways within our own culture—such as our cultural focus on individualism, justification of violence, and our often narrow Western understandings of justice. The big picture concern however is this: following Jesus has become something that fits snugly into an American evangelical worldview, both theologically and politically. Unfortunately, as I argue in Undiluted, any time following Jesus becomes comfortable, and any time Jesus seems to agree with our entire worldview, it’s a good sign that we have adapted our concept of Jesus to our culture and that we’d bode well to return to the roots of his message and start over.

RNS: You share about leaving fundamentalism/conservative evangelicalism and moving into a faith that you describe as being oriented on a more radical Jesus. Isn’t this just liberalization?

BC: Not at all, and I think this is part of the problem with a modern evangelical worldview. We have become so sure, so confident in our theological and political rightness that any straying from the company line is dubbed “liberalization” and immediately discounted. But [tweetable]the liberal vs. conservative paradigm is a false choice when we’re talking about following Jesus.[/tweetable] Jesus claimed that his kingdom was “not of this world”; he did not come to push a conservative agenda or a liberal agenda—he came to present a radically different way of living that no human worldview could ever duplicate. In a world of false binary options, [tweetable]Jesus is the one in the middle inviting us into a “third way” of living.[/tweetable]

BC: I would argue that this concept is the most God-centered approach to forgiveness. By freely forgiving our enemies and those who have wounded us, we are free to live without the destructive bitterness that unforgiveness creates. In Greek, forgiveness actually means “to send away” and is the mechanism by which we turn people and situations over to God—recognizing that it is his job, and only his job, to deal with them appropriately. Withholding forgiveness is the human-centered approach, because we’re basically telling God that we’re better at his job than he is.

RNS: You write that it’s not the exclusive nature of Jesus, but his inclusivity, that offends our sense of justice. Why then do people get so uptight with “Jesus is the only way” assertions?

BC: I’m an orthodox Christian, so I believe that Jesus is the only way we can be reconciled to God—that’s definitely a line that would certainly be offensive. The people I see more often offended, however—both in Jesus’ time and ours—are the religious elite who simply can’t stomach that Jesus is always busy throwing the doors open and inviting in the outsiders. Jesus on multiple occasions tells stories that tend to place outsiders above the people who thought they were safe insiders, even at one point saying that they are “entering the Kingdom ahead of you!” The message of Jesus resonates with an outcast who wants to have a seat at the table but is infuriating to the religious who think they’re too good to sit next to them.

RNS: You write about Jesus being so popular that he couldn’t go anywhere without getting swarmed by a crowd, but doesn’t the Bible also say he was hated and despised?

BC: It’s both / and situation. Yes, the prophet Isaiah predicted the Messiah would be “despised and rejected,” which he was— mostly by the religious power holders. Too often I fear, we take this “rejected” aspect and embrace it for ourselves, thinking that if we’re expressing our faith in an abrasive way that we’re somehow “like Jesus”. Unfortunately, this isn’t accurate—the book of Mark tells us that when it came to regular people, Jesus was so popular that he couldn’t go anywhere without being swarmed by a large crowd. Certainly, Jesus wouldn’t have consistently attracted crowds if he was always obnoxious. So when it comes to outsiders, [tweetable]the way we live and express our faith should make Jesus attractive, not repulsive.[/tweetable]

RNS: You argue that the way Jesus typically taught his disciples shows that instead of the idolatry of certainty, he wants to invite us to live out our faith in a sea of tension. Explain.

BC: The Gospels will report that there were times when Jesus taught in nothing but parables, and that this did not make understanding easier for people—it was actually quite frustrating. At one point, his disciples practically high-five each other and say, “finally, you’re not speaking in parables anymore!” As much as we’d like him to be, [tweetable]Jesus isn’t always as black and white and the rest of scripture isn’t always, either[/tweetable]. I think this had a divine intent: when we reach a point of absolute certainty our hope and faith ends up placed in our own confidence. Jesus wants to leave us in tension because it forces us to keep following, to keep seeking, and to stay humble.