Today, we’re reeling from all the violence in the air. War. The 13th anniversary of the 9/11 attacks. Unfolding stories of domestic abuse. It’s a tough morning but we’ll persevere (and consult an inspired revision of Oprah).

Off to war we go and where it leads, no one knows.

President Obama, who once campaigned to get out of Iraq, leads us back in a complex, limited — but undated — military effort to rout the terrorist so-called Islamic State. In Wednesday night’s speech to the nation, Obama announced “If you threaten America, you will find no safe haven.”

Oh, and by the way, the USA is really strong, those guys don’t represent Islam and… well, here’s the text of Obama’s speech so you can sort it out for yourself instead of relying on cable news chatter. 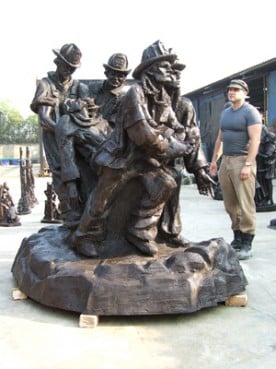 Deacon Greg Kandra, blogging for Patheos, reprints the last homily delivered by Fr. Mychal Judge, an NY Fire Department chaplain. The day before Judge became the first FDNY fatality of 9/11, he praised the Lord, telling the firefighters, “You do what God has called you to do.”

On the 13th anniversary of the September 11 terror attacks, a rabbi in Bayonne, N.J. looks across the water to the New York skyline. Jeffrey Salkin, writing for the Jewish Journal observes the Tear Drop Memorial, a Bayonne landmark that commemorates the horror. Whose teardrop is it?

“And it is also God’s tear — that we, who are God’s partners, have not been keeping up our end of the partnership. God cannot fight this evil alone. It is now up to us.”

As the wife of now-ex-NFL player Ray Rice, defends the man who beat her unconscious, Twitter is abuzz with women sharing their experience of domestic abuse. #WhyIStayed and #WhyILeft.

Beverly Gooden, author of “Confessions of a Church Girl, explains why she launched the trending tweet with posts such as this:

I stayed because my pastor told me that God hates divorce. It didn’t cross my mind that God might hate abuse, too. #WhyIStayed 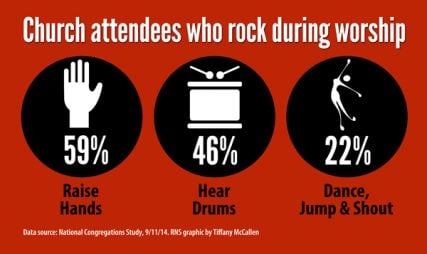 From the no-God corner:

A Western Pennsylvania county council will not post “In God We Trust” in its chambers. The Allegheny County executive called the proposal “a movement by the right-wing evangelical Christians across the country basically to impose Christianity” in public buildings.

Sam Harris — one of the high profile atheists who have stormed out on speaking tours and sacrificed many trees (and pixels) to anti-religion books –– wants you to see the light. The light of spirituality, actually. Kimberly Winston tunes in on his pitch for Buddhist-based mindfulness meditation in, of course, his umpteenth book.

Pennsylvania State Rep Brian Sims is gay, godless, and a Democrat in a Red State.  How does he manage without ever campaigning in a church? He’s got faith in humanity, he tells Faitheist blogger Chris Stedman.

It turns out that Pope Benedict’s infamous Regensburg speech eight years ago — with a mention of Islam as a violent, “evil and inhuman” — may not have been a great gaffe after all. David Gibson revisits the Regensburg speech and delves into why Benedict’s allies are burnishing his star. “Regensburg was not so much the work of a professor or even a pope,” wrote the Rev. Raymond de Souza in a column for the National Catholic Register, a conservative publication. “It was the work of a prophet.”

An alliance of Christians has been trying to tell the U.S. and the world that Christians are in grave danger in the Middle East. Lauren Markoe looks at the Washington group “In Defense of Christians” that wants you to know global Christianity is in danger.

Another view on Islam

RNS’ executive-editor-on-the-road Kevin Eckstrom, still blogging from Indonesia this week, discovers that life under Shariah law in Banda Aceh (think ground zero of the Tsunami) is not exactly what you’d expect. See Travelblog: The truth about Shariah.

Another view on Pope Francis (not a happy one)

Clergy sex abuse survivors in the U.S. say the two American priests should not serve on key investigative panels on the abuse crisis because they allegedly failed to act against known abusers in the past. The Survivors Network of Those Abused by Priests (SNAP) wants “bolder measures” by Pope Francis.

Mark Silk, blogging at Spiritual Politics, says he’s rarely in accord with the nation’s most conservative Christian denominations but he, too, wants the Supreme Court to rule on same-sex marriage in Utah. Why do you think he cautions, “Be careful what you wish for”?

Oh, for God’s sake, let’s end on an up note here.  Drew Dyck at Leadership Journal edits Oprah’s Starbucks coffee jacket quotes. Instead of “trumpeting a Disneyfied gospel of self-actualization,” his versions take a biblical twist.