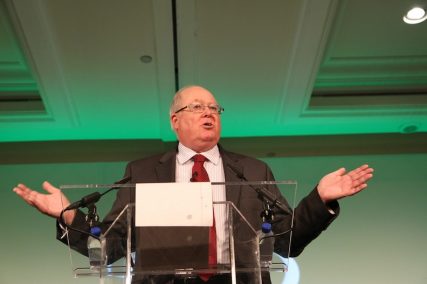 William Donohue of the Catholic League announced that his organization would not take part in next year’s popular celebration of Irish-American culture, New York’s St. Patrick’s Day parade.

NEW YORK (RNS) After organizers agreed to allow a gay and lesbian group to march, William Donohue of the Catholic League announced that his organization would not take part in next year’s popular celebration of Irish-American culture, New York’s St. Patrick’s Day parade.

Donohue said the parade organizers had “betrayed” him by promising that an anti-abortion group would be allowed to participate if a gay group were given a permit. But he claimed the committee later reversed itself and said abortion opponents would not be marching next year.

“They not only told me one thing, and did another, they decided to include a gay group that is neither Catholic nor Irish while stiffing pro-life Catholics,” Donohue said in a statement issued Thursday (Sept. 11). “This is as stunning as it is indefensible.”

The parade organizers had sent mixed signals about whether an anti-abortion group would be marching in the parade.

Initially, parade spokesman William O’Reilly said a group opposed to abortion would be marching but said it hadn’t been selected. Then he said an anti-abortion group had to apply to march, and this week said all the spaces had been taken.

“Had a group filed an application they might be marching in 2015,” O’Reilly told The Wall Street Journal. “But no application, or even phone call, came forward. The parade is … packed. There has to be a cutoff point.”

After years of dogged resistance and legal battles, the St. Patrick’s Day parade committee said earlier this month that it would allow gay and lesbian groups to march under their own banner and they chose [email protected], a lesbian, gay, bisexual and transgender resource group from NBC, to be the first. The network is a sponsor and broadcaster of the event, which processes along Fifth Avenue.

New York Cardinal Timothy Dolan — the parade’s grand marshal next March 17 —  welcomed the move, a significant change from previous archbishops and one that sparked criticism from many Catholic conservatives.

The rebukes have continued, with one Catholic activist accusing Dolan of “a dereliction of duty” while National Catholic Register columnist Pat Archbold said Dolan’s response was “a shameful and sinful capitulation.”

The parade is not a Catholic-sanctioned event but it is closely identified with Irish Catholicism.

In his statement this week, Donohue insisted that his decision not to march does not mean that he is “at odds” with Dolan.

“Cardinal Dolan has no more rabid supporter than Bill Donohue,” he said, “and nothing that has transpired recently changes anything.”