BERKELEY, Calif. (RNS) It was a gathering that would have been unthinkable just five years ago. 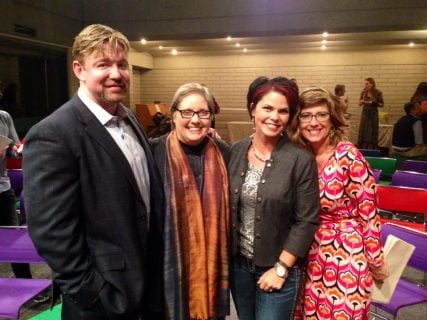 Left to right, Mitch Mayne, Dr. Caitlin Ryan, Wendy Montgomery, and Diane Oviatt pose for a photograph, during the showing of a documentary about a Mormon family whose 13-year-old son came out as gay. Photo courtesy of Mitch Mayne

On a cool summer evening, in a borrowed classroom overlooking San Francisco Bay, about 150 men and women gathered to screen a short documentary about a Mormon family whose 13-year-old son came out as gay.

The Montgomerys, who accepted their son and his news, were ostracized by church members, some of whom refused to accept Communion distributed by the young man in church. Like many conservative Christian denominations, the 15 million-member Church of Jesus Christ of Latter-day Saints bans homosexual activity and considers it grounds for exclusion from Mormon rites, rituals and even the afterlife.

But those in the room — mostly Mormons ranging from babes in arms to the elderly with canes — thought differently. They wanted to learn how to support their lesbian, gay, bisexual and transgender brethren in their local wards, or congregations. 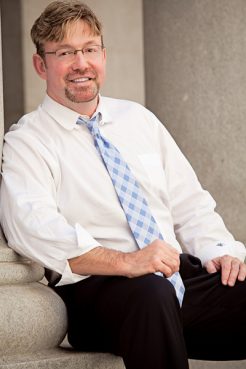 Mitch Mayne is a Mormon blogger based in San Francisco. Photo courtesy of Mitch Mayne

“The phrase ‘gay Mormon’ was not part of our vocabulary prior to 2011,” said the evening’s organizer, Mitch Mayne, before the event. “And if we did say it, it was fringe and full of stereotypes, like we were all hiding in the closet and full of self-loathing or we were out of the church entirely and putting on body glitter and Speedos.”

That has since changed — as demonstrated by the standing-room-only crowd that included more than a half-dozen local Mormon officials. Today, many people who identify as both Mormon and LGBT are gaining acceptance within the wider LDS church and culture.

Many credit Mayne, 43, with fostering this change when he became the first publicly gay Mormon executive secretary – a leadership position in service of a bishop –  in 2011, a post he held for more than two years in a church that has an all-volunteer, all-male clergy.

The first tool in Mayne’s arsenal? Social media — Facebook, Twitter and the popular blog he started when he became executive secretary to chronicle his experience as both gay and Mormon.

“Social media has enabled us to coalesce and create informed allies inside the Mormon faith and build the recognition that how we respond to LGBT individuals is everyone’s concern,” Mayne said after the event. “I have great faith in Mormons. They really want this change.”

LGBT Mormons are not the only minority group to harness social media and the Internet. Several other factions have taken to Facebook, Twitter and the blogosphere to push back against church norms and a culture they consider unfair, outdated, and, at times, hateful: 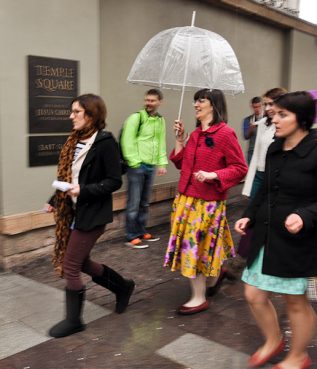 Kate Kelly, one of the founders of Ordain Women, has been excommunicated by the Mormon church because of her views on gender equality, according to the group.

These campaigns seem to be prompting responses from the church, if not outright change. In August, the church surveyed about 1,000 randomly selected members to assess their views on a number of subjects, including “the roles, responsibilities or therapy of females in the church.” Two years ago, stung by the backlash from its support of California’s Proposition 8 that banned gay marriage, the church launched a new website exploring the relationship between its LGBT members and the broader church.

“We are starting to see a significant disconnect between what the church is telling people to believe about same-sex marriage and homosexuality and what people actually believe and accept,” said John Gustav-Wrathall, a senior vice president of Affirmation, an independent organization that supports LGBT Mormons and their families.

“I think the Internet has a lot to do with that. LDS people are putting their stories out there, and that is influencing people’s perception.”

“For (church leaders) to put up the website is phenomenal,” he said. “Yes, it has some problems, but the fact that we are even addressing the issue and using the term ‘gay,’ I cannot stress how impactful that is. If you look at the web there is gay Mormon stuff everywhere, and five years ago that wasn’t the case.”

Church officials say their doctrine is guided only by revelation and Scripture, not by popular opinion. “There has been no change whatever in the Church belief that homosexual sex is sinful,” LDS spokesman Eric Hawkins wrote in response to emailed questions. “What has changed — with Church encouragement — is how to respond to those who struggle to stay in the Church and at the same time maintain that doctrinal position.”

Mormons attitudes toward social media are certainly in flux. Last year, Elder M. Russell Ballard, a member of the Quorum of the Twelve Apostles, the church’s second-highest presiding body, warned church members of the persuasive powers of the Internet.

Yet in August, Elder David A. Bednar, also a member of the Quorum, suggested Mormons take to social media “to sweep the Earth as with a flood.”

Feminist Mormons have been among the most active on social media. Nancy Ross, head of Ordain Women’s social media team, said there are at least a dozen multi-author blogs written by and for feminist Mormons and at least as many Facebook groups. Facebook, she said, is where the seeds of change get planted at the local, one-on-one level.

“That is one of the huge things we do on Facebook, is offer a variety of counterarguments when someone says something offensive about women in the church,” she said. “Within two hours, someone is going to have 30 or 40 responses on how to counter that.”

Nancy Ross, head of Ordain Women’s social media team, said there are at least a dozen multi-author blogs written by and for feminist Mormons and at least as many Facebook groups.

As a moderator of the Facebook page for Feminist Mormon Housewives, the oldest and most popular blog written by feminist Mormons, Jerilyn Hassell Pool has seen the effectiveness of social media firsthand.

A cradle Mormon, Pool has had moments where she’s considered leaving the church. But being able to voice her opinions online and connect with those who share them has kept her in the fold.

“I feel if I stay and continue to raise awareness and raise my voice, I am making my church a better place,” she said. “I am raising the collective conscience of other people on social media, and that makes me feel less complicit in perpetuating these gender stereotypes.”

At the Berkeley meeting, people seemed to be looking for a way to do the same thing with regards to LGBT Mormons. One man, a baby on his lap for most of the evening, asked how he could show LGBT Mormons in his ward that he, a straight man, was supportive. A young woman asked what she could do to reach out to LGBT Mormons who might be in the closet.

Part of the answer to both was “get online.” “The Internet has broken the bonds of silence,” Mayne told the crowd. “Those people and their families are no longer adrift.”