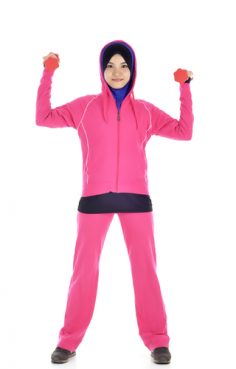 Woman in hijab exercising with weights. Image by Badins via Shutterstock.

Feeling a bit down on yourself this morning? Consider a hijab . . .

A new British study concludes that women who wear the hijab, by a small but not insignificant margin, feel more positive toward their bodies, express less desire to be skinny and were less influenced by media images of an "ideal" woman. Perhaps every copy of Cosmo should come with a headscarf.

Jersey nun on the path to sainthood

Our own Jersey boy, David Gibson, reports that his native state may soon be known as home of the latest American saint, a Bayonne-born nun.

Here's his report on the upcoming beatification -- in Newark -- of Sister Miriam Teresa Demjanovich. Still waiting on the Bruce Springsteen song about her.

Pope to get no extra security in Albania

That's despite reports that ISIS might target Francis on his Sept. 21 visit to the Balkan nation. Habeeb Al Sadr, Iraq's ambassador to the Holy See, told Italian paper Il Messaggaro that he wouldn't rule out an attack on the pontiff by the Islamic militant group. The Vatican says it has "no particular concern" about the visit.

'Islam is not to blame,' says brother of slain aid worker

Just days after ISIS beheaded David Haines weekend, his sibling made a video statement warning about growing religious militarism, but asked people not to blame Islam as a religion for his brother's horrific death. Said Mike Haines, quoting a passage from the Quran:

Since good and evil cannot be equal, repel thou evil with something that is better.

Pastor James MacDonald of the Chicago-area megachurch recently told his 13,000-member congregation that he and his elder board messed up their public discipline of three elders who last year spoke out against a "culture of fear and intimidation" and a lack of transparency in the church.

HBC is saddled with more than $50 million in debt. MacDonald said apologies have been made and reconciliation is sought, Christianity Today reports.

I am not sure why they're writing about this now but the Huffington Post has a cool story about a poem Bono wrote for and about Billy Graham in 2002. It doesn't seem as if the U2 front man ever put it to music. But there is music video in the Huffpo piece, a We-Are-The-World-type tribute song to Rev. Graham created by Pat Boone, Bono and many other famous voices. If you've never heard it, check out "Thank you Billy Graham," if only to see if you can identify those singing.

ISIS militants have explicitly forbidden the teaching of evolution in Iraqi territory under its thumb, even though evolution wasn't part of Iraq's curriculum in the first place. And it goes without saying that art, music, history and philosophy are out. So are any songs that encourage love of country. They will be offering something called "religious sciences," however.

Kanye West says "I am a married, Christian man," in response to criticism over his haranguing a kid in a wheelchair to stand up and dance at his latest Australian concert.

John Allen is betting that the upcoming Synod of Bishops meeting on the family in Rome will tackle annulment reform.

Same-sex couples in Indiana won't be able to get married until the Supreme Court says they can.

Dear Offended: You should be offended. But it makes for great copy so we are going to keep writing about these offensive items dreamed up by these retailers, who will in turn design yet another Lord Ganesh-denigrating duvet cover or something equally tasteless. Now here's a question for you: We know about Lord Ganesh but what is a duvet cover? - RNR

Sign up for the Religion News Roundup today. It's real news in real time -- except for that stuff I made up at the end.