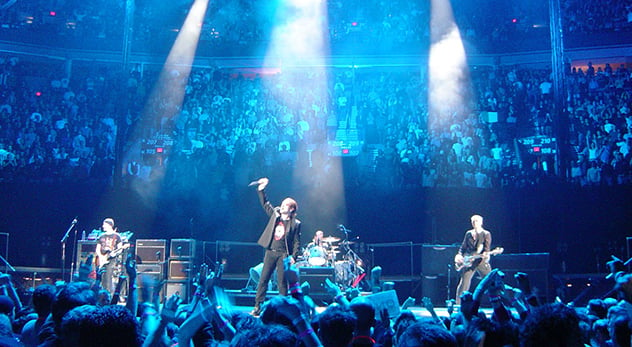 If U2’s faith is a secret, like a writer for The New Yorker suggested, it is one of the worst kept ones in the global music industry today. – Image courtesy of Matthew McGee (http://bit.ly/1miVGdv)

The same month that U2 released their 13th studio album, “Songs of Innocence,” the spotlight has turned to the iconic rock band’s faith. In an article for The New Yorker titled “The Church of U2,”Joshua Rothman explored “confusion” around U2’s faith and claimed that they are a “semi-secretly Christian rock band.”

But applying such a label to U2 generally and their sunglasses-clad singer, Bono, seems difficult to defend. Even a cursory look at the band’s beliefs and song lyrics show that they are very much out of the Christian closet.

If you carefully attune your ears to U2’s lyrics, you’ll find there are 50 or more references to Bible verses in their songs. In “Bullet the Blue Sky,” for example, they sing about Jacob wrestling with the Angel of the Lord (Genesis 32) and there is a reference to speaking with “the tongues of angels” (1 Corinthians 13) in “I Still Haven’t Found What I’m Looking For.” Bono even belts “see the thorn twist in your side”—an obvious reference to the Apostle Paul’s words in 2 Corinthians 12:7—in the song “With or Without You.”

Lead singer Bono is so comfortable talking about his Christian faith that he even agreed to be interviewed by “Focus on the Family.” In it, he spoke to Focus’ president Jim Daly about how much he liked King David and said he believes that “Jesus was, you know, the Son of God.”

In another interview, Bono wasn’t waffling when he articulated a view of the atonement of Jesus: “The point of the death of Christ is that Christ took on the sins of the world, so that what we put out did not come back to us, and that our sinful nature does not reap the obvious death.”

If you want something more heartfelt, you might reference when Bono noted that he and his family maintain a vibrant prayer life:

“I pray to get to know the will of God, because then the prayers have more chance of coming true — I mean, that’s the thing about prayer,” Bono told Ireland’s RTE One. “We don’t do it in a very lofty way in our family. It’s just a bunch of us on the bed, usually, we’ve a very big bed in our house. We pray with all our kids, we read the Scriptures, we pray.”

There are gobs of similar comments in interviews accessible by a simple Google search. You’ll find that Bono wrote a poem for Billy Graham lauding the evangelist for his effort to “reach the world with the Gospel message, offering the free gift of peace with God to millions.” And you’ll read about Bono and the band’s philanthropic efforts—from AIDS relief to poverty alleviation—and how faith has been a motivating factor of this work.

In The New Yorker’s article, Rothman said, “Much of the confusion around U2’s faith stems from the fact that they’ve never been an “officially” Christian rock band.” But this misses the point. The band’s official designation has nothing to do with whether or not they have genuine faith. Some musicians and bands exist within the “Christian” genre. Others–like The Fray or Switchfoot or even U2–have created crossover appeal as secular bands who are outspoken about their religious beliefs.

In the end, we only have the facts. U2 writes and sings songs that are replete with Bible references and their lead singer is a vocal Christian who prays regularly and confesses that he believes Jesus was the Son of God. If U2’s faith is secret, it is one of the worst kept ones in the global music industry today.

News
Evangelist Nick Hall: Christians have become ‘loud about everything but Jesus’
Follow us on Facebook!
Submit your photos to RNS