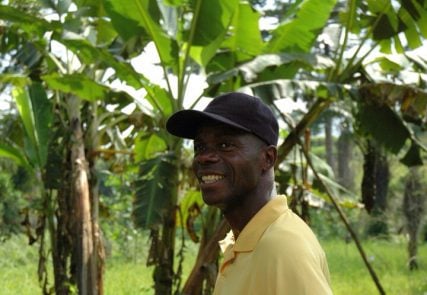 Moise Mamy was killed in southern Guinea while leading an Ebola education delegation. Seven others, including government officials and journalists, were also killed.

There are 10 statues in Westminster Abbey in London commemorating martyrs of the 20th century. It’s an unusual set of martyrs that includes Martin Luther King Jr., Oscar Romero and Dietrich Bonhoeffer.

No, these modern martyrs were killed because of how they lived out their faith. Their faith led them to seek justice and serve others, and the result was that it cost them their lives.

This week, we witnessed the making of another modern martyr when eight members of an Ebola team were killed in a small village in southern Guinea.

Moise Mamy was one of those killed. Mamy was a pastor and a health worker, who was in Womey as a member of the Eau de Vie Ebola awareness team. Eau de Vie is a ministry of Compassion & Mercy Associates (CAMA), a relief organization associated with the Christian & Missionary Alliance (C&MA). The C&MA is an American evangelical denomination that focuses on missionary work around the globe.

Jon Erickson is an Alliance international worker who has been friends with Mamy for 24 years. Indeed, he decribes Mamy as being “closer than a brother.” Erikson reported that Mamy created the Ebola education team after a family stricken with Ebola arrived from Liberia.

The Ebola education team distributed soap and bleach to help control the outbreak. However, some Guineans believed that the bleach was actually the cause of Ebola, something sent to kill them rather than save them. The team was chased from one village. Mamy returned to the region later, accompanied by some government officials and members of the press. They were attacked and killed, their bodies dumped in a septic tank.

In 2008, Moise wrote about his conversion to Christianity for Alliance Life, the magazine for the C&MA. He wrote that when he was asked about becoming a Christian, he asked how much it cost.

“He told me it would cost a lot, but it wouldn’t be money I would have to give—it would be my whole life,” Mamy wote. “Then he told me that God loves me. This was the first time I had heard someone say that.”

Early one morning I begin having extreme stomach pain and could not get up. For one hour, I was in agony while my wife sent word to my father. He came with a piece of kaolin [a clay mineral] in his pocket. He told me, “It is your ancestors who have taken your stomach. You need to eat the kaolin to take the pain away.” I told him, “God lives in me, and the ancestors have no more power over me.”

My father said that I was denying the truth. He and some boys carried me to the village in a wheelbarrow. There, everybody came to look at me as if I were a criminal. My mother started to cry, saying that I had disobeyed their god, who was taking me back.

My family members told me they would do everything so I could be freed. I answered, “Let me die. I will go to my God, but I will never ask forgiveness from the ancestors. I am now following GOD.” Everybody started to cry.

I told Nowei to ask Nicodeme, a Christian villager, to come pray for me. After he prayed, I asked my wife to find a nurse to give me some medication. The treatment worked, and God saved me from the illness. Today, I praise the Lord because my father and mother have become Christians.

Mamy went on to become a pastor and led the Mano C&MA Church in Guinea (Mano are Mamy’s people group). He co-counded the C&MA’s Hope Medical Center in N’Zao, Guinea. He was a farmer, an evangelist, a self-taught oral surgeon, and entrepreneurial administrator.

Mamy gave his whole life to his God, and he was murdered as he was living out his faith. I suspect that even if he knew what was going to happen, he would have still said, “Let me die. I will go to my God.”

Posted in
Beliefs Opinion Tobin Grant: Corner of Church and State
Get the RNS spiritual guide to the 2020 election

News
Fear of Ebola keeps the faithful at home in Congo
General story
Church in Congo suspends sacraments as Ebola spreads
Opinion
Instant messages from hell
News
Survivors remember Ebola epidemic as Samaritan’s Purse releases documentary
Beliefs
Amid tears, ‘cry out with joy:’ Pope Francis’ Christmas Day blessing
© Copyright 2020, Religion News Service. All rights reserved. Use of and/or registration on any portion of this site constitutes acceptance of our User Agreement and Privacy Policy, Privacy Statement and Cookie Notice. The material on this site may not be reproduced, distributed, transmitted, cached or otherwise used, except with the prior written permission of Religion News Service.