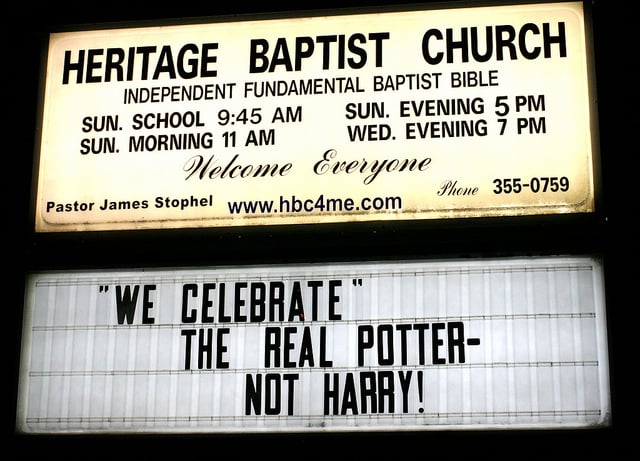 A woman calling herself “proudhousewife” has taken it upon herself to rewrite the story of Harry Potter, banishing all mention of witchcraft. Hogwarts has become the “School of Prayer and Miracles” and Dumbledore is a married Reverend. There are seven chapters in all–Harry prays the sinner’s prayer in the first and the story culminates in his choosing the Gryffindor hat at the very end–with various asides about the role of women, politics, and Catholicism.

Here’s the thing: I’m sure the whole thing is satire. The woman who wrote it is too familiar with the Harry Potter books herself to not have read them time and again, and her name–Grace Ann Parsons–yields almost nothing in a Google search. The name itself is a pretty clear indication that we should double-check our assumptions about the story’s veracity: Grace Parsons? It’s quite the tip-off.The introductory notes are sprinkled liberally with smiley faces and references to specific Bible verses, and the stories themselves traffic in stereotypes that, in my experience, are more typically expressed by people outside the church than people within.

I could be wrong, but if the Internet has taught me anything, it is to never take anything for granted. Proudhousewife may really be Grace Ann Parsons, witchcraft-avoiding mother and devout Christian woman. But more likely, she is some dude (they’re always dudes) with a little too much time on his hands and an axe to grind against the evangelical subculture.

We–and I am chief among this crowd–are so quick to believe the worst about Christianity. And there are good reasons to do so. We don’t have a great track record on many of the issues we’re supposed to care about most, on issues of justice and inclusion and care for the poor.

Many Christians have done a lot of good in those arenas, but just as many, it seems, have made a bad name for themselves and for our little band of weirdos. It is easier to position myself above them and not associate with them than to say that people whose actions I do not like are also my brother and my sister.

I was ready to roll my eyes, ready to believe the worst when I read the first installment of proudhousewife’s book. But then I felt–and I don’t use this word lightly–convicted. I felt convicted about my own need to read Christians into a particular narrative, and the failure of the Christian imagination. My Christian imagination. There are plenty of Christian people doing silly things, harmful things, culturally dangerous things. But that’s not the whole story, and as a Christian, I need to be more gracious, more patient, in my responses–because my bent will always be toward criticism. That’s part of who I am.

My imagination fails profoundly when I can’t see the good around me, and when I assume the worst about people all the time. And for that, I am sorry.