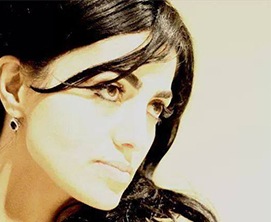 October 8, 2014 (New York, NY) – Acclaimed Turkish journalist and women’s rights activist Rabia Kazan, who has lived under the threat of death for speaking out against the dangers of radical Islam, will be holding a press conference in New York City to announce the launch of her new global campaign of resistance This is Not My Allah (www.thisisnotmyallah.com)

Spurred by recent and much-publicized atrocities committed by ISIS in the name of Islam, Ms. Kazan hopes to ignite a worldwide resistance movement of Muslims and all people of conscience to denounce violence committed in the name of religion by such groups as ISIS, the Taliban, Al Qaeda and others. Catapulted to worldwide prominence after interviewing Mehmet Ali Agca who attempted to assassinate Pope John Paul II in 1981, she gained further notice after writing a bestselling book in 2007 called Angels of Tehran, an expose of the practice of a coercive legalized form of prostitution in Iran called “temporary marriage.”

Having worked at the World Federation of United Nations Associations and currently serving as a writer and women’s rights advocate at the International Civil Liberties Association (ICLA) an NGO based in Switzerland. Ms. Kazan’s career is marked by her commitment to expose extremism within her native religion.

The press conference will take place at 11 a.m. on Wednesday, October 15th in the Bijou Room at the Hilton Times Square in New York City at 234 West 42nd Street. PLEASE NOTE THE NEW LOCATION. Attendance is by RSVP only to [email protected]. For security reasons, only those who have received clearance will be allowed into the press conference.

Joining Ms. Kazan at the press conference will be Alain Wagner, president of ICLA, which has been on the frontline of the effort to raise global awareness about the dangers of radical Islam.  (http://www.libertiesalliance.org/)

Ms. Kazan intends to speak out about the specific dangers that Islamic extremism poses for women, a danger she knows firsthand. Deciding to remove her hijab (veil) a few years ago, she became an instant target, threatened with death. At the October 15th press conference in New York City, Ms. Kazan will boldly call upon Imams to promote a broad, tolerant, secularized interpretation and practice of Islam.

Though heartened by the concerted military response against ISIS in Syria, Ms. Kazan is calling for a campaign of words and actions. “The first step is to end the silence. Let’s raise our voices and drown out the hatred,” she says. “What kind of God would want the barbarism that is being committed in His name? We must unite and fight this obscenity. Evil happens because of the absence of resistance from people of conscience. It is not a supernatural force. We are at a critical moment in human history. Those who do not oppose the murderous mission of Muslim extremism are passively enabling it.”

Rabia Kazan’s This is Not My Allah Call to Action includes the following actions:

In addition to journalists, the October 15th press conference will be attended by religious leaders along with representatives from human rights organizations, writers and scholars of the Middle East. RSVPs with information about one’s affiliation should be sent to Shira Dicker at [email protected]

For further information about Rabia Kazan or This Is Not My Allah, or to schedule an interview with her ahead of the October 15th press conference at The Hilton Times Square in New York City, please contact Shira Dicker at [email protected]. Please visit www.thisisnotmyallah.com and follow Rabia Kazan on Facebook and on Twitter @thisisnotmyallah.