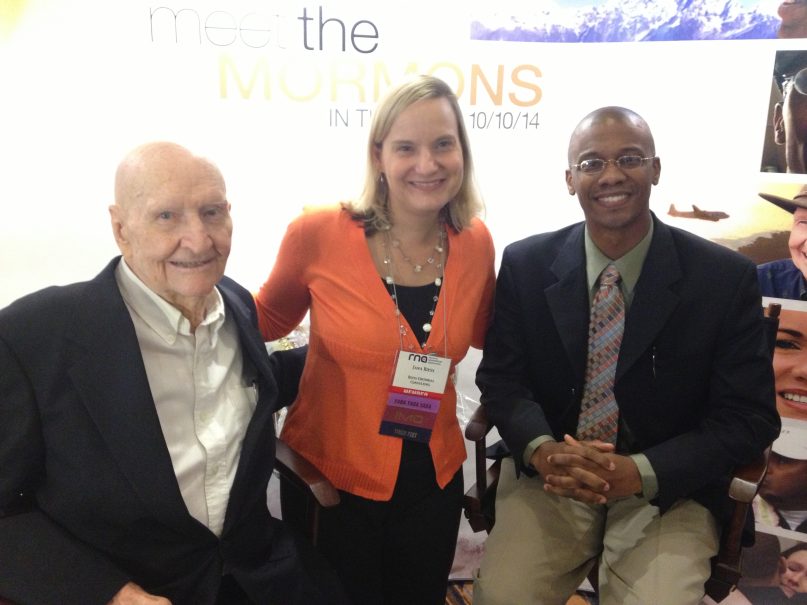 Me with the “Candy Bomber,” Gail Halvorsen, and “The Bishop” (now a stake prez), Jermaine Sullivan, at RNA in Atlanta.

We’re two days out from the nationwide release of Meet the Mormons, the Church-produced documentary that traces the lives and faith of six Latter-day Saints. The Deseret News reported today that the film is set to open Friday on more than 300 screens in 45 states.

So far, the feel-good documentary has garnered a few reviews, including thoughtful and mostly positive ruminations from fellow Mormons at By Common Consent and The Cultural Hall. The production values appear to be high and the overall effect pleasing.

It has not generated much interest outside the LDS community, however, and as of this writing does not have a score at all on Rotten Tomatoes. That will no doubt change within the next weeks (and it will be interesting to see how much the RT audience score, presumably driven by the fans of All Things Mormon, diverges from the professional critics’ aggregated metascore when the critics’ data begins to become available).

Professional early reviews have not been as kind as LDS websites have been. The film reviewer for the Salt Lake Tribune declared the movie to be nice enough but claimed it’s “not a documentary but an infomercial, meant less to inform than to introduce a sales pitch.”

The Village Voice chimed in today with an even more harsh assessment of film-as-advertisement:

The Church of Latter-day Saints‘ hyper-capitalist spirit guides Meet the Mormons, an extension of the “I’m a Mormon” campaign that sought to paint its ranks as a motley, hip lot. Instead of explaining what Mormonism is, this slick corporate video for the church only teaches us to want: On offer is the wholesomeness that comes with family, stability, and physical fitness.

… Aimed at nonbelievers, Meet the Mormons isn’t substantial enough to screen on the first day of LDS 101; the church’s most basic tenets — and controversial aspects — are elided completely. Instead, the focus is on the just-swell lives of six members, with a conspicuous emphasis on ethnic and cultural diversity, possibly to paper over the church’s racist past.

Who, as the Voice’s headline put it, would want to pay $14 for a “90-minute commercial” about Mormonism? 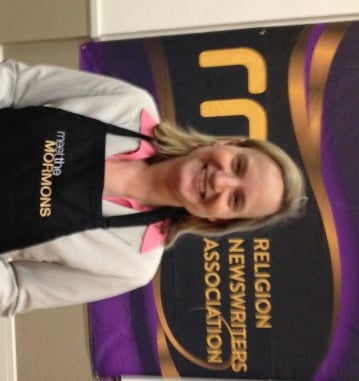 And after the movie, we Mormons will bake brownies for you. You’re welcome.

Answer: Mormons, that’s who. Myself included.

In part, my interest was piqued by meeting some of the folks behind the movie.

A few weeks ago at a journalists’ conference I had the opportunity to sit down with the movie’s director, Blair Treu, and two of its “stars,” Atlanta bishop (now stake president) Jermaine Sullivan and “the Candy Bomber” Gail Halvorsen, the 1940s pilot famous for airlifting sweets to German children after WWII.

I found the director to be pretty up-front about exactly the kinds of criticisms that are starting to come in about the movie, especially the one about it being intended only for Mormons. “The bottom line is that we just want to look for opportunities to find common ground [with people of other religions],” Treu told me. “It’s not so much about the details of our beliefs as the details of who we are in trying to live those beliefs.”

And the president of Excel Entertainment, which is distributing the film, said that “If nothing else, if members of the Mormon Church walk out of this film feeling that they ought to be better Mormons, then . . . [that’s enough].”

It may be that after this initial foray into doing a major theatrical release, the LDS Church retreats back into its own entertainment subculture, producing movies by Mormons for Mormons. And there’s nothing wrong with that (well, at least not if the movies are good).

But I for one am glad that we’re trying to venture out of our bubble — even if the end result is that the only people who head to the movies this weekend to “meet the Mormons” are already Mormons themselves.