VATICAN CITY (RNS) The world’s Catholic bishops on Monday (Oct. 13) signaled a move toward greater tolerance of gays and lesbians, an about-face so unexpected that leaders of the church’s right wing called it a “betrayal.” 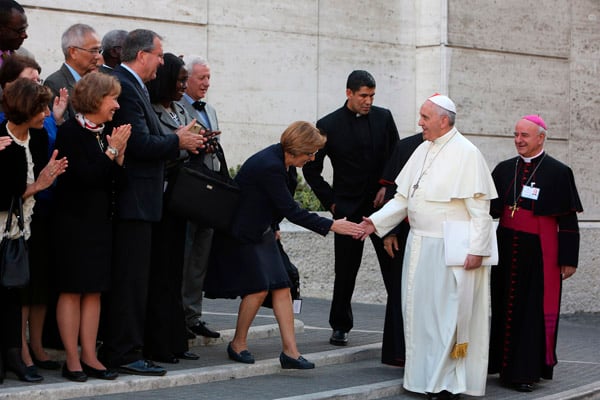 Pope Francis greets auditors of the Synod on the Family as he arrives for the afternoon session at the Vatican Oct. 10. Photo courtesy of Catholic News Service

Noting that gays and lesbians have “gifts and qualities” to offer the church, the midpoint assessment reflected the impact that Pope Francis seems to be having on the two-week Synod on the Family as he pushes for a more open, less doctrinaire approach.

“Are we capable of welcoming these people, guaranteeing them a fraternal space in our communities?” said the communique from the nearly 200 bishops and lay delegates. “Often they wish to encounter a church that offers them a welcoming home.

“Are our communities capable of providing that, accepting and valuing their sexual orientation, without compromising Catholic doctrine on the family and matrimony?”

While they reaffirmed their opposition to gay marriage and same-sex unions, the bishops’ groundbreaking document nonetheless said homosexuality called for “serious reflection” and described it as an “important educative challenge” for the church.

The bishops also foreshadowed a simpler approach to marriage annulments and responding to cohabitation.

The document was presented to the media by Hungarian Cardinal Peter Erdo, the synod’s relator general, flanked by other cardinals.

While no decisions or doctrinal changes were announced, the report was described as an “earthquake” by John Thavis, journalist and author of the best-selling book, “The Vatican Diaries.”

The approach provoked an angry reaction from a dozen bishops before they left the synod hall and a fiery debate between the church’s right and left flanks.

“This is a stunning change in the way the Catholic Church speaks of gay people,” said the Rev. James Martin, a Jesuit author and editor at large for the Catholic magazine America.

“The synod is clearly listening to the complex, real-life experiences of Catholics around the world and seeking to address them with mercy, as Jesus did.”

While reinforcing marriage between a man and a woman, the bishops noted that gay partnerships had merit — moving toward the more inclusive approach signaled by Pope Francis when he famously responded “Who am I to judge?” when asked about homosexuality.

The shift in tone for a 2,000-year-old institution that officially maintains that homosexuality is “intrinsically disordered” surprised Marianne Duddy-Burke, head of DignityUSA, the country’s largest Catholic gay and lesbian organization.

“The specific language used about lesbian and gay people is astonishingly new,” Duddy-Burke said from Boston.

“The recognition that ‘homosexuals have gifts and qualities to offer to the Christian community’ is a far different starting point than saying we are ‘disordered,’ which has been the mantra for almost 30 years. That positive language is more hopeful.”

The progressive group Call to Action said it was encouraged by the report, describing it as the “breath of fresh air” that Francis had brought to Rome and that has inspired many to hope for change.

“We pray that this positive shift in tone and language will also mean changes in hurtful and dated policies,” said Call to Action Executive Director Jim FitzGerald.

The document — and the real or implied changes that may or may not materialize — stunned church conservatives. The Catholic group Voice of the Family, which represents 15 organizations in eight countries, called the document a “betrayal.”

“Those who are controlling the synod have betrayed Catholic parents worldwide,” said Voice of the Family co-founder John Smeaton.

“We believe that the synod’s mid-way report is one of the worst official documents drafted in Church history. Catholic families are clinging to Christ’s teaching on marriage and chastity by their fingertips.”