(RNS) Pope Francis stepped slightly outside of ecumenical protocol when he sent his support and congratulations to the new leader of a breakaway group of conservative Anglicans.

The pope’s message came during the Oct. 9 installation service for the Most Rev. Foley Beach, the new archbishop of the Anglican Church in North America, which broke away from the Episcopal Church and the Anglican Church of Canada over theological differences on salvation and sexuality.

Anglican bishop of Argentina, Gregory Venables, is a supporter of ACNA and had a long-standing friendship with Pope Francis, whom he knew as Cardinal Jorge Bergoglio, during their time in Buenos Aires. 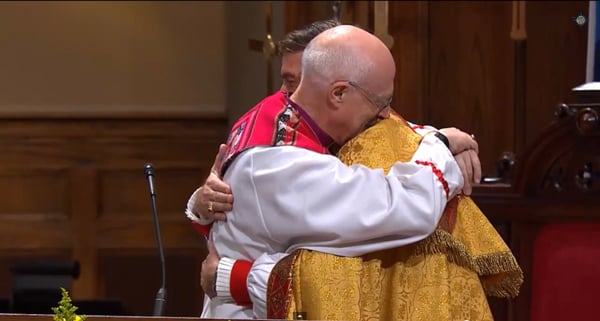 The pope sent no formal, written message to Foley’s installation in Atlanta, but he offered his personal greetings, according to the Rev. Thomas Rosica, a Vatican spokesman.

During the installation service, Venables recalled recovering from a severe illness — “lying there wondering if I ever wanted to be alive again” — earlier this year when the phone rang. The pope has a habit of calling people out of the blue, and the voice on the other end of the line introduced himself as Francis.

“‘Francis who?’ He said, with a wonderful degree of humility and patience … ‘No, it’s Father Jorge,'” Venables recalled.

Venables, the former Anglican leader for Argentina, Bolivia, Chile, Paraguay, Peru and Uruguay, described his role as a messenger from Pope Francis. 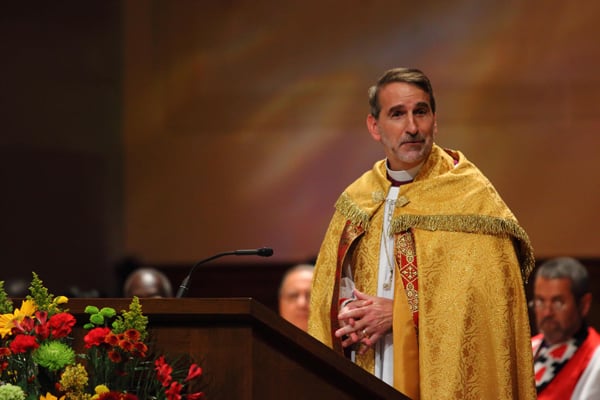 “He asked me this evening, in fact he wrote to me just a few days ago and said, ‘When you go to the United States please, in my name, give my personal congratulations and greetings to Archbishop Foley. And assure him of my prayers and support at this moment and in the future as he leads the church at this very important moment of revival and mission.’”

Asking Foley to step forward for a traditional Argentine blessing, Venables kissed him twice on the forehead before hugging him.

In an interview earlier this month, Welby said breakaway groups are not part of the communion. “ACNA is a separate church. It’s not part of the Anglican Communion,” Welby said in an Oct. 3 interview with The Church of Ireland Gazette. He called ACNA “an ecumenical partner.”

It’s not the first time the breakaway conservatives have received support from the Vatican. In a 2003 organizing meeting outside Dallas, delegates received a supportive message from Cardinal Joseph Ratzinger, then the Vatican’s doctrinal czar, who in 2005 was elected as Pope Benedict XVI.

ACNA, which was formally launched in 2009, reports a membership of about 97,000. The Episcopal Church, in membership figures released earlier this month, counts 1.86 million members, a 1.4 percent drop from the previous year. Critics say those losses likely don’t include a large exodus of Episcopalians in South Carolina, which remains the subject of a contentious legal battle.