VATICAN CITY (RNS) Pope Francis says Judas Iscariot was not the only sinner among the Twelve Apostles but he was the one who “closed himself to love.”

In a homily during his morning Mass at the Vatican on Tuesday (Oct. 28), the pope spoke of the universality of sin while encouraging the faithful to fully immerse themselves in the Catholic Church and not simply stand on the threshold of their faith.

Francis stressed that Jesus opened the doors of his church to everyone without distinction, irrespective of their sins, and built the church on the foundation of the Apostles, “all of them sinners.”

“As St. Paul says, this church is built on the foundations of the Apostles; he chose 12 of them. All of them sinners,” the pope said in his homily. 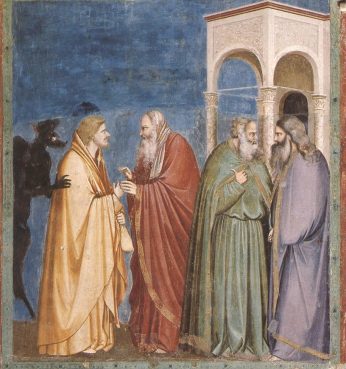 The pope said Jesus wanted everyone to be inside the church he created, not as strangers simply passing through, but with the “rights of a citizen” with their roots in the church.

Francis has referred to the role of Judas several times since becoming pope in 2013. In May last year, he said that Judas had stood apart “in his solitude” and his selfishness grew to the point where he betrayed Jesus.

The pope warned that those who “isolate their conscience in selfishness” end up losing and Judas ended up that way as “an idolater, attached to money” for the 30 pieces of silver he received for betraying Jesus.