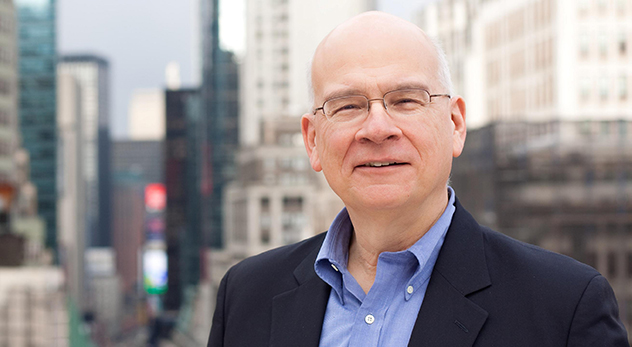 The New York Times bestselling author and influential pastor gets practical on prayer. He calls it "the key to everything we need to do and be in life." - Image courtesy of Tim Keller
November 3, 2014
Jonathan Merritt

The New York Times bestselling author and influential pastor gets practical on prayer. He calls it "the key to everything we need to do and be in life." - Image courtesy of Tim Keller

Thirty years ago, most of America's influential evangelicals resided below the Mason-Dixon line. In recent years, however, the power balance has shifted.

Purpose-driven pastor Rick Warren is situated in sunny Southern California, mega-church minister Bill Hybels has built a Chicagoland empire, and Tim Keller has helped make New York City a growing haven for the faithful. Keller is the New York Times bestselling author of numerous books, including "The Reason for God," and was named one of the most influential religious figures by New York Magazine. He's become successful by being smart, a phenomenon that makes the oft-dismissed faithful giddy.

But the revered minister has now shifted his focus to a more personal topic: prayer. Tomorrow, he releases a new book, "Prayer: Experiencing Awe and Intimacy with God," which is already pre-selling well on Amazon. Here, Keller offers practical advice on the topic and defends his claim that prayer is "the key to everything we need to do and be in life."

RNS: People in nearly every civilization throughout history have had an instinct for prayer. A recent Pew study found that 17% of non-believers even say they pray regularly. What do you make of this?

TK: Prayer is a response to the knowledge you have of God, and everyone has at least some knowledge of deity, according to Romans 1. Reformer John Calvin taught that, because we are made in the image of God, we all have a divinitatis sensum or some sense of God’s reality. And Puritan theologian John Owen said that the natural impulse to pray is present in all people.

TK: Jonathan Edwards wrote that God is sometimes pleased to answer the prayers of unbelievers, and he gives the example of the Ninevites in Jonah 3 among others. Edwards rightly adds that this doesn’t mean that God must hear their prayers, only that out of God's mercy and wisdom, He sometimes does.

RNS: You address the question of frequency in your book. The Bible says to “pray without ceasing.” Since praying all the time is not really an option for most, how often should a person pray?

TK: While literally "praying without ceasing" is not an option, [tweetable]there is no reason why a Christian cannot learn to pray and meditate on God constantly, episodically, all day.[/tweetable] Martin Luther proposed that you pray twice a day—before going to work and in the evening, either after work or before bedtime. I suggest reading John Owen’s “On the Grace and Duty of Being Spiritually Minded.”

RNS: Why do some prayers go unanswered or seem to?

TK: J.I. Packer says that ultimately “there is no such thing as unanswered prayer.” I believe that is true, though from another perspective God obviously does deny specific requests. John Calvin puts it well: “God grants our prayer, [even if] he does not always respond to the exact form of our request”. Later he says: “even when he does not comply with our wishes, [he] is still attentive and kindly to our prayers, so that hope relying upon his word will never disappoint us.”

In other words, [tweetable]God will either give us what we ask or will give us what we would have asked for if we knew everything he does.[/tweetable] This means there is a “safety catch” on prayer. [tweetable]God won’t give us things we may ask for in our limited knowledge that wouldn’t be the best.[/tweetable] Without this safety catch, thoughtful people would never pray again. We need to know that God will answer the basic desire but find a form and mode that isn’t harmful.

RNS: Many people don’t know what to say when they pray? Any advice here?

TK: First, just pray what’s on your heart and don’t worry. God is wise and will hear your desire and answer the request in the best way. Second, use the Lord’s Prayer as a model. Last, remember that if you are a believer, the Holy Spirit will help you as you pray. So go ahead.

RNS: Romans 8 says that when we don’t know how to pray the Holy Spirit “intercedes through us with wordless groans.” What does this mean and what difference does this make?

TK: There’s not complete consensus among bible scholars, but most would agree with what Augustine says about this text. He said this is a promise that if we are Christians, the indwelling Spirit supports our hearts and guides our prayers when we are groaning and confused, and that God will hear our petitions even in their imperfect state.

RNS: You call prayer “the key to everything we need to do and be in life.” Everything? Really?

RNS: I think that is fair to say. [tweetable]Prayer is the main path to true self-knowledge.[/tweetable] You can’t really know yourself without getting the perspective that comes from being in the presence of a holy God. And if Augustine is right that what determines who we are is what we love, then the only way to fundamentally change ourselves is by changing what captures our hearts. That only occurs through worship and prayer. Also, the only way to truly know God--not just know about God--is through prayer. Finally, John Calvin says that it is through prayer that God gives us everything God wants to give us. So, is that everything? Well, it’s everything that’s good.