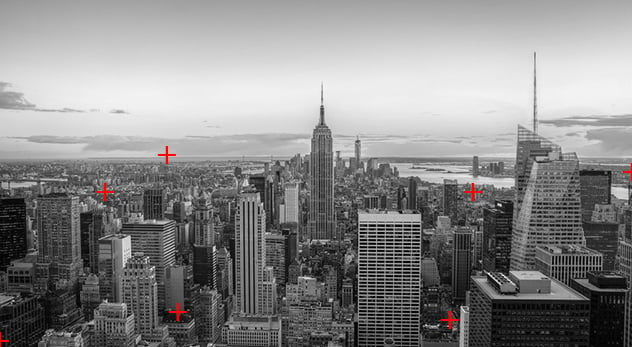 New York City is more spiritually active today than in the late 1990s or even in the wake of 9/11. The city’s crop of influential Christian leaders is partially responsible.

In New York City, everything is always changing all time. From the skyline to the weather to transient residents jumping from neighborhood to neighborhood trying to find the right mix of price, size and location, the city is perpetually in flux.

But the Big Apple is experiencing a surprising kind of change—the religious kind—as more Christian communities and leaders are taking root and flourishing there.

New York City is not known as a particularly religious place. Though Gallup reports an above average population of Catholics and Jews, the state of New York is well below average for Protestants and other non-Catholic Christians.

But according to Barna Research’s survey of more that 3,400 residents in the New York media market, New York City is more spiritually active today than in the late 1990s or even 2001 in the wake of 9/11. Barna reports that church attendance is increasing, the number of “unchurched” residents is decreasing, and the number of “born again” Christians is on the rise, surging from 20% in the late 1990s to 32% today.

According to Barna, born again Christians are “individuals who said they have made a personal commitment to Jesus Christ that is still important in the life and who believe they will go to Heaven because they have accepted Christ and been forgiven of their sins.”

Possible explanations for New York’s Christian renaissance are numerous, but the city’s crop of increasingly influential Christian pastors, educators, and thought leaders is partially responsible. Here are at least 16 leaders–in unranked order–who are contributing to the city’s Christian revival:

1/2. Tim and Kathy Keller: As founding pastor of Manhattan-based Redeemer Presbyterian Church, Tim Keller has become a respected Christian voice within New York. But his New York Times bestselling books, including The Reason for God: Belief in an Age of Skepticism, have expanded his influence well outside the borders of the five famous boroughs. In recent years, Tim’s wife, Kathy, has also emerged as an influential voice in her own right, even recently penning a popular book on faith and gender.

3. Sally Lloyd-Jones: Very few children’s book writers have the influence or success that Sally Lloyd Jones does. Her Jesus Storybook Bible, for example, has been a runaway success and a New York Times bestseller. Recently, the book’s publisher, Zondervan, announced that sales had exceeded one million units. With those kinds of sales, it’s hard to deny her impact on Christian families and children in New York City and elsewhere.

4/5. Jim and Carol Cymbala: As pastor of the historic Brooklyn Tabernacle, Jim Cymbala may be best known for the famed 280-voice choir that sings before he preaches each Sunday. But Jim has grown his congregation from 30 weekly attendees to more than 16,000 members. His sermons are downloaded by thousands each week, and he has authored more than a dozen popular books including Fresh Wind, Fresh Fire. Carol Cymbala, Jim’s wife, directs the Grammy Award winning Brooklyn Tabernacle choir and is author of several books including, He’s Been Faithful.

6. Greg Thornbury: Recently appointed as president of The King’s College, a respected evangelical college located until recently in the Empire State Building, Greg Thornbury is at the helm of a vibrant Christian educational institution in the middle of America’s most influential city. King’s faculty includes a list of rising Christian voices that includes Alissa Wilkinson, who is also chief film critic at Christianity Today, and Anthony Bradley, who is pioneering conversations on evangelicals and race.

7. Jon Tyson: More than a successful pastor, the Australian-born Jon Tyson is a pioneer of new ways to do church. Through his Trinity Grace Church, Tyson has developed a “city parish model” whereby the larger congregation is divided into smaller communities arranged by neighborhood. In short, it is a New York City church that operates like New York City does. As a result, there are now eight growing Trinity Grace campuses stretching from Washington Heights in the north to Park Slope in the South. Pastors across America have pattered their own ministries on Tyson and his idea of “missional tribes.”

8. Michael Luo: There are few jobs with more influencing power than being a staff writer for The New York Times. As an investigative reporter for the iconic news outlet, Michael Luo is shaping the thoughts of masses of Americans every day through his writing and work. Luo is an outspoken Christian whose essay helped fuel a national fascination with NBA star Jeremy Lin.

9/10. Gabe and Rebekah Lyons: Gabe and Rebekah Lyons’ annual Q Gathering attracts hundreds of participants each year and is a virtual “Who’s Who” of Christian educators, thinkers and influencers. But in recent years, the couple has also begun offering a slew of other events in New York City, convening Christians around topics such as vocation, womanhood, and the renewal of America’s cities. Additionally, Gabe has authored the bestselling unChristian and The Next Christians, and Rebekah recently released Freefall to Fly: A Breathtaking Journey Toward a Life of Meaning, a memoir detailing her spiritual journey after moving to New York City.

11. Gabriel Salguero: In addition to being senior pastor of New York’s Lamb’s Church, Gabriel Salguero also serves as president of the National Latino Evangelical Coalition. He is a powerful leader of the growing community of Hispanic evangelicals in America. Salguero’s work has placed him on the front lines of national discussions on Christians and immigration, education, and poverty.

12. Eric Metaxas: The accomplishments of Eric Metaxas run long. He is the New York Times bestselling author of Amazing Grace and Bonhoeffer: Pastor, Martyr, Prophet, Spy, the co-host of “Breakpoint,” a radio commentary that is broadcast on 1,400 stations to an audience of eight million, and was the keynote speaker at the 2012 National Prayer Breakfast in Washington, D.C. Metaxas is also founder of “Socrates in the City,” an event in which people dialogue on “Life, God, and other small topics.” He’s a respected thinker by any reckoning, and is no small part of the Christian renaissance taking place in New York City.

13. A.R. Bernard: As founder of Brooklyn’s Christian Cultural Center, A.R. Bernard is pastor of the largest church in America’s largest city. He is also the President of the Council of Churches of the City of New York representing 1.5 million Protestants, Anglicans and Orthodox Christians. He sits on the NYC Economic Development Corporation Board, served on NYC School Chancellor’s Advisory Cabinet and Mayor Michael Bloomberg’s 2001 Transition Team.

14. Carl Lentz: Details Magazine called Carl Lentz “Jesus Christ’s Superstar”, but the members of his Hillsong Church NYC will tell you there is more to their pastor than hype. He’s a dynamic speaker, a capable leader, and head of one of the most vibrant churches in the Hillsong Church global network. Nearly 6,000 people worship at his church each Sunday at Irving Plaza near Manhattan’s Union Square.

15. Raymond Rivera: In 1992, Raymond Rivera founded the Latino Pastoral Action Center (LPAC), which started as a division of the Manhattan-based NYC Mission Society, the city’s oldest and largest social service agency. But Rivera was an influential Christian leader long before the launch of LPAC. From 1975 to 1984, he was the National Executive for the Hispanic Council of the Reformed Church in America and served on the Board of Trustees of the New York Theological Seminary. In 2004, he launched the National Urban Ministry Project, an AmeriCorps-based service delivery and capacity building partnership that continues to impact the region.

Editor’s Note: The original article contained only 12 names. As additional recommendations were submitted by readers, the list was expanded. The headline was updated to reflect these changes. Clearly, there are many more Christian leaders than those listed here who are making an impact on the city and abroad. You’ll find additional names in the comments, and you may also suggest your own.