A few days ago, Peter Boghossian—a philosophy professor, speaker for the Richard Dawkins Foundation for Reason and Science, and author of A Manual for Creating Atheists—caused a stir when he posted the following statement on Facebook and Twitter:

I’ve never understood how someone could be proud of being gay. How can one be proud of something one didn’t work for?

Many atheists, such as LGBTQ atheist author Greta Christina, responded—but Boghossian dug in and continued to defend his statement, tweeting additional statements like “Questioning that one can be proud to be gay is a leftist blasphemy.”

As a queer atheist, I too am perplexed by both Boghossian’s question and his defensive reaction to criticism—especially from someone who lists “reason, rationality, critical thinking” in his Twitter bio. 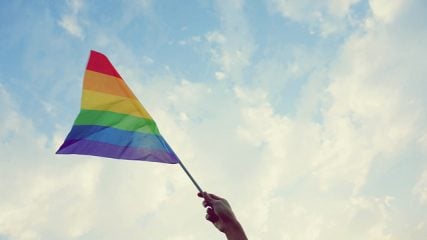 Perhaps he truly doesn’t understand why some LGBTQ (lesbian, gay, bisexual, transgender, and queer) people feel proud to be LGBTQ. Rather than assume a more cynical motive, I’m going to treat his question as sincere. But when confronted by an LGBTQ-related question you don’t understand, the reasonable next step is to ask LGBTQ people. And it doesn’t take much investigating to find out why many LGBTQ people feel a sense of pride.

Many of us are proud because we’ve spent years working to combat internalized homophobia, biphobia, and transphobia, and we continue to struggle against discrimination for our entire lives. I’ve been ostracized by friends, violently attacked by strangers, rejected by loved ones, and I regularly receive anti-queer tweets, emails, and Facebook comments. (Some of them come from atheists, too.)

So stepping out and being honest about who we are is, for many of us, an ongoing and often risky process. And on a more basic level, the very act of admitting who we are to ourselves requires the hard work of challenging what we’ve been told about who we should be. Coming out—and living out—takes work.

Of course, not all LGBTQ would say that they are proud to be LGBTQ. They’re free to their own perspective. But why imply that it is not even remotely understandable that some would?

In a time when more and more atheists are encouraging their fellow nonbelievers to be “openly secular,” I wonder if Boghossian sees any parallels between the celebratory spirit of LGBTQ pride and the joy many atheists find in being honest about what they believe. It’s an imperfect parallel, but maybe he understands on some level what it’s like to feel proud to claim an identity that comes with consequences.

Does Boghossian take pride in the work it took to step out and be open about his atheism—knowing that some people will despise him because of it? What does he think about the fact that many atheists feel proud that they were able to summon the determination to challenge normative, widely-held ideas and assumptions about what they should believe and how they should live?

Boghossian’s initial statement reflects a lack of consideration for experiences other than his own—a common byproduct of the blinders of privilege. As someone who also benefits from various degrees of privilege—I am white, male, cisgender, and an American citizen, for starters—I know that there are many things that I don’t understand. But when confronted by this reality, as I frequently am, I strive to listen. I often fail, but I try.

I hope Boghossian will try to listen, too. His comments don’t exist in a vacuum, and he’s certainly not the only atheist that has demonstrated a failure to understand various aspects of queer experience. A number of LGBTQ people have been critical of how some atheists have co-opted queer issues or language, and others have expressed frustration that their struggles are seemingly used as props to further an anti-religious agenda.

Boghossian’s initial question, and his subsequent defenses, serve as a reminder that religious communities don’t have a monopoly on not understanding LGBTQ experiences—and that we should all make more of an effort to listen to and learn from others.

I’m proud to be queer because I live in a world that constantly tells me that I shouldn’t be. Fighting that narrative—and its frequently ugly and violent manifestations—takes constant work. Perhaps that’s something atheists, Boghossian included, can relate to.