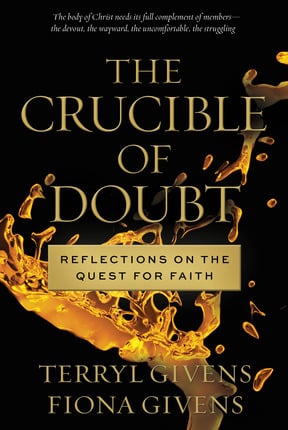 From October 10 to November 7, we’ll be discussing this book each Friday here on the blog.

Toward the end of The Crucible of Doubt, the book we have spent the last few Fridays discussing, the authors go into detail describing a period of doubt in the life of Joseph Smith.

And then it all fell to pieces. He felt nothing when he prayed, and the heavens were silent for months as the situation in Missouri got even worse.

I found myself cheering that this story of near-despair was being told in a Church-published book without the requisite triumphalism at the end. It closes not with a miracle, or a pithy lesson like “the Church had to suffer in this way because the Lord had something even bigger and better planned for the Saints!”

Rather, it ends with Joseph weeping on the people’s behalf.

I felt so uplifted by this honesty. Why don’t we tell stories like this more often?

This week in our final discussion of The Crucible of Doubt, let’s talk about storming the heavens — apparently in vain. I’ve known plenty of Mormons who’ve left the Church, sometimes because of policies on women or blacks or gays; sometimes, though, it’s because God went AWOL with no forwarding address.

I don’t think our religion does a good job of acknowledging the regularity of dark nights of the soul, to say nothing of actually providing resources to help people understand how common (and necessary) they are.

With that in mind, here are some questions to guide our conversation in this last week:

All the posts in this series on doubt: