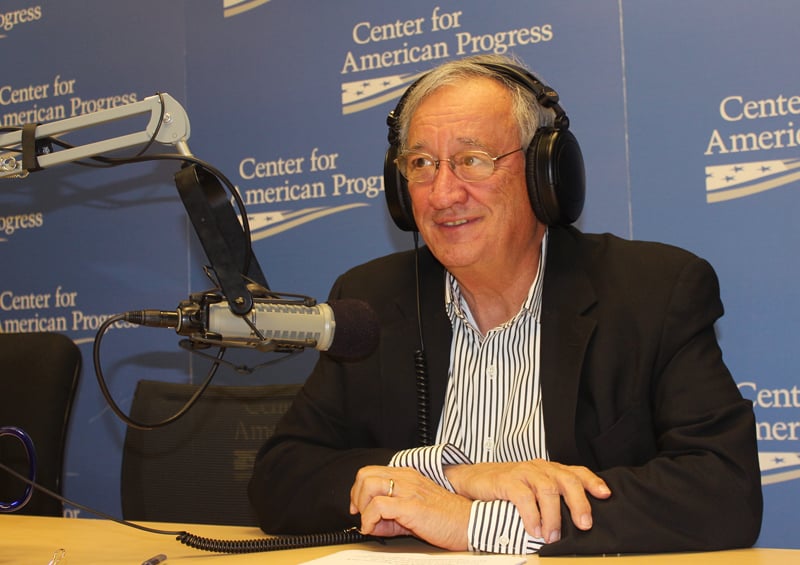 The Rev. Welton Gaddy preaching at Washington National Cathedral in 2011 as part of "Faith Shared," a joint project of Interfaith Alliance and Human Rights First to engage faith leaders on the national and community levels in interfaith events intended to highlight respect among people of different faiths. Photo courtesy of Interfaith Alliance

WASHINGTON (RNS) Like the lawmakers he lobbies on Capitol Hill, the Rev. C. Welton Gaddy has a foot in two worlds -- Washington during the week, his hometown on the weekends.

So when Gaddy boards a flight each Friday from Washington to Monroe, La., he ignores the person sitting next to him. It may not seem very pastoral, but in fact, it is: He has a sermon to write.

Gaddy, a progressive defender of religious freedom, will retire next month as president of the Interfaith Alliance. But he plans to continue as pastor of Northminster Church, an Alliance of Baptists congregation that his members describe as an island of liberalism in a sea of Louisiana conservatism.

For 16 years, the former Southern Baptist has worn two hats -- preaching most Sundays and advocating for equal treatment of people of all beliefs on weekdays in Washington.

“A lot of the people in Washington who talk about religion don’t understand religion; it’s more of a subject of theoretical discussion,” said Gaddy, 73, in an interview in his small office near Georgetown. “And I think that’s why it has been important that I have my one foot in a local congregation and one foot in a national agency.”

Gaddy’s views -- supporting interfaith relations and opposing government-endorsed prayer -- are a far stretch from his Tennessee childhood, where his fundamentalist parents looked down on the faith of local Presbyterians because they didn't go to church on Sunday evenings.

He grew to not only see the merit of Christians worshipping together but, as president of the Alliance of Baptists, organized a ceremony of apology at the U.S. Holocaust Memorial Museum for sins of “complicity” and “silence” about negative stereotypes of Jews.

A few years later, in 1998, he took the helm of the Interfaith Alliance, which aimed to demonstrate that “the Pat Robertsons and Jerry Falwells of the world don’t represent all Christians.”

He expanded its mission beyond frequent critiques of the religious right to a range of other issues. On his “State of Belief” weekly radio program and podcast, he recently interviewed now-pro-LGBT evangelical ethicist David Gushee and discussed the first-ever Muslim Friday prayers at Washington National Cathedral.

“We’ve drawn inspiration from the fact that he always suggests that one needs to be proactive about these things, not just reactive,” said Sabi Singh, a Sikh layman who is president of the Interfaith Alliance of Oklahoma.

The Rev. Barry Lynn, executive director of Americans United for Separation of Church and State, called Gaddy a role model for religious leaders who might otherwise be reluctant to enter church-state battles.

“I think that his position as a preaching pastor in Louisiana made it easier for other clergy ... to interject themselves into these controversies,” said Lynn, who co-authored a 2008 book, “First Freedom First,” with Gaddy, a onetime board member and president of Americans United.

Gaddy has watched the evolution of religious freedom battles with great concern. Left to right, Sarah Albahadily, Kathy Weaver, Jeff Hamilton, Welton Gaddy, Sabi Singh and Carl Rubenstein at the 2012 annual meeting of the Interfaith Alliance of Oklahoma, where Gaddy was the keynote speaker. Photo courtesy of the Rev. Jim Shields

“Honestly, one of the most difficult parts of leaving this office is that I think religious freedom in our nation is under more attack and in more danger than it was 25 years ago,” he said.

He accuses conservatives -- including those in the Southern Baptist Convention he left behind -- with playing a role in those attacks.

“The Catholic bishops and the Christian evangelicals have done to religious freedom what they did to the Bible: They co-opted the language of it,” Gaddy said.

His sparring partners in Washington and Southern Baptist circles agree on threats to religious liberty, but for entirely different reasons.

“He’s correct that religious freedom is in more trouble ... not only the last 25 years but in my lifetime -- but for totally different reasons than the ones that Welton would cite,” said the Rev. Richard Land, former head of the Southern Baptists' Ethics & Religious Liberty Commission.

While Gaddy supports same-sex civil marriages, for example, Land opposes them, and worries about state laws that compel bakers, florists and photographers to provide wedding services for same-sex couples.

But Land said he and Gaddy are “respectful adversaries”: “With him, it was issues. It was not personal attack.”

Gaddy is particularly proud of his office's work on hate crimes legislation, and he recently attended a White House ceremony marking the fifth anniversary of the Hate Crimes Prevention Act. Still, other goals remain elusive, especially getting the Obama administration to halt a Bush-era policy that allows faith-based groups to hire and fire based on religion while receiving government funding.

“When they formed the task force on making the (White House faith-based) office constitutional, they asked me to be on it,” he said. “The day they called I said, ‘You know, I still want it closed.’” Despite those differences, the White House included Gaddy on that task force.

Even as he waged church-state wars, Gaddy spent about 20 hours each week preparing the sermon he preaches to a congregation of about 125 each Sunday.

“He doesn’t mince his words with us at all, but then again we’re not a real typical congregation,” said James Yeldell, chair of the church council at Northminster, where Gaddy said Republicans, Democrats, gay and straight worship side by side.

“I don’t want to put adjectives in front of the church,” said Gaddy. “The church is a house of worship, open to everybody.”

After racking up more than 1 million frequent-flier miles, Gaddy hopes to travel with his wife, Judy, as others pick up the mantle of fighting for religious and human rights.

“I’ll keep working on them in one way or the other and keep writing about them and talking about them,” he said. “I don’t have the sense that either Jefferson or God is wringing their hands because I’m leaving.”