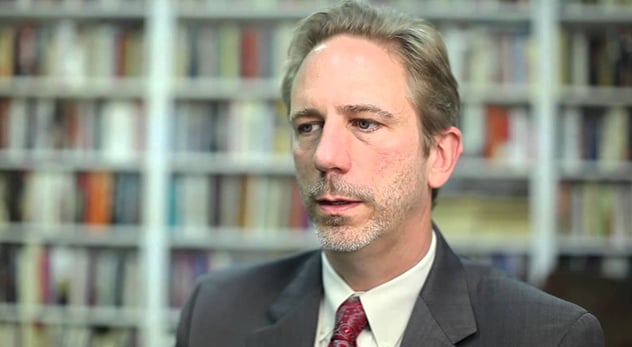 David Gushee is distinguished professor at a prominent Baptist university and co-author of one of the most popular Christian ethics books of the last 25 years. He’s also now an LGBT ally. – Image courtesy of David Gushee

NEW YORK (RNS) At a moment when American churches and politicians are warring over gay rights and same-sex marriage, each side needs every soldier it can muster. Conservatives are about to learn that one of America’s leading evangelical ethicists is defecting to the opposition.

David Gushee, a Distinguished University Professor of Christian Ethics at Mercer University, a Baptist college and divinity school in Georgia, plans to announce that he now affirms same-sex relationships, in a speech to The Reformation Project Conference, a gathering of pro-LGBT Christians in Washington, on Nov. 8.

“I do join your crusade tonight,” Gushee’s prepared remarks say, according to a draft obtained by Religion News Service. “I will henceforth oppose any form of discrimination against you. I will seek to stand in solidarity with you who have suffered the lash of countless Christian rejections. I will be your ally in every way I know how to be.”

Gushee says the journey to his current position has been a long and winding one. During the first two decades of his academic career, he maintained a traditional view of sexuality and “hardly knew a soul who was not heterosexual.” As he worked on issues such as torture and climate change, his attention was drawn to other issues — slavery, segregation, defamation of Jews, subjugating women — for which Christians once cited Scripture for their entrenched positions.

Then in 2008, his younger sister, Katey, came out as a lesbian. She is a Christian, single mother, and had been periodically hospitalized for depression and a suicide attempt. It made him realize that “traditionalist Christian teaching produces despair in just about every gay or lesbian person who must endure it.”

A former student wrote Gushee that his teachings had contributed to the painful struggle of understanding sexual identity, and scientific data suggesting that same-sex attraction is a naturally occuring form of human diversity sent him back to the Bible. Years later, he concluded that the Bible doesn’t actually teach what he previously assumed.

“It took me two decades of service as a married, straight evangelical Christian minister and ethicist to finally get here,” his speech says. “I am truly sorry that it took me so long to come into full solidarity with the Church’s own most oppressed group.”

Gushee also has penned a book that makes a biblical and philosophical case for LGBT affirmation. The volume, titled “Changing Our Mind: A Call from America’s Leading Evangelical Ethics Scholar for Full Acceptance of LGBT Christians in the Church,” will be released by David Crumm Media prior to the speech. The book is loosely based on a series of articles Gushee published with Baptist News Global (formerly Associated Baptist Press) exploring the topic.

Going forward, Gushee told me he hopes the book will become part of the growing body of resources and research that makes a case for Christian acceptance of LGBT relationships — but he is also making himself available to the movement itself. Among his top priorities: providing help for families trying to understand their gay and lesbian children, as well as producing materials for college and youth pastors.

It is difficult to overstate the potential impact of Gushee’s defection. His Christian ethics textbook, “Kingdom Ethics,” co-authored with the late Glen Stassen, is widely respected and was named a 2004 Christianity Today book of the year. He serves as theologian-in-residence for the Cooperative Baptist Fellowship, a coalition of 15 theological schools, 150 ministries, and 1,800 Baptist churches nationwide.

While other pro-LGBT Christian activists — including Justin Lee of the Gay Christian Network and Matthew Vines, author of “God and the Gay Christian” — have been dismissed in some circles as wet-behind-the-ears youngsters without formal theological training, Gushee, 52, is a scholar with impeccable credentials. He can add intellectual heft to what has largely been a youth-led movement, and is not someone who can be easily dismissed.

To be sure, Gushee’s change of heart is not entirely unexpected — he has parted company with many fellow evangelicals on a number of issues, including left-of-center positions against torture and on the environment.

Gushee’s decamping will likely be seen as treasonous by conservative colleagues, including the Rev. R. Albert Mohler Jr., president of The Southern Baptist Theological Seminary, where Gushee taught in the 1990s. While Mohler said the decision is “tragic and causes me real grief,” the two have had ongoing disagreements dating back to Gushee’s time on the Louisville campus.

“It was clear early on that he and I, and he and Southern Seminary, were moving in different directions, and those who’ve been watching David’s trajectory will see this as a logical conclusion,” Mohler said. “He’s now placed himself outside of employability at the previous institutions where he taught.”

That other institution is Union University, a conservative Baptist college in Tennessee where Gushee was a professor from 1996 until 2007. David Dockery, who served as president of Union during that time, said he was saddened by Gushee’s defection but declined additional comment.

While Mohler acknowledged Gushee’s influence, especially among more progressive evangelicals, he doesn’t believe Gushee’s switch presents any new challenges to the conservative cause.

“David is not saying anything new, and he’s a little late to the party,” Mohler said. “When you look at the figures who are making arguments for same-sex marriage and relationships, there is an expanding literature that is as much as 20 years old.”

Gushee disagrees, saying many scientific studies on sexuality are new, as is using LGBT suffering as a logical starting point for the conversation. But he doesn’t expect this to change the minds of Mohler and other hardline conservatives. He only hopes that those on the right will help end the bullying of LGBT persons, stop using harmful rhetoric, and resist laws that are punitive against sexual minorities.

In the end, Gushee says doesn’t think much about the backlash headed his way from his newfound opponents.

“I still love Jesus and read the Bible and pray every morning, and I don’t really care what they say,” he said. “I’m willing to let God and history be my judge.”